MEMX (Members exchange), an equities exchange founded to better serve the needs of the investing public, is every economist’s dream because of the prospect of reducing the existing monopoly power in the US stock exchange market. The new exchange, backed by the likes of Morgan Stanley, Goldman Sachs and Blackrock, was meant to launch on July 24th. However, as a result of COVID-19, this has been postponed to the 21st September 2020. The launch of the exchange will represent retail and institutional investors, with a vision of low costs for executing market deals, and as such will be a competitor to the higher cost exchanges such as the NYSE and Nasdaq.

MEMX is targeting a key area of consumer satisfaction, suggesting that the launch of the exchange has the potential for success. The three main stock market players (NYSE, Nasdaq and Cboe) charge high fees to consumers, to access key market data. This ranges from the cost for information (such as the prices offered and paid for a stock) to having to pay for information about the size of trades, cost metrics MEMX is vague about going forward. The parent companies of the three main exchanges account for over 60% of trading volumes in the US cash equities market according to the Financial Times, as shown by Figure 1. 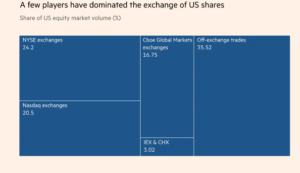 Figure 1: The share of US equity market volume by exchange. Financial Times.

As such, challenging this oligopoly by focusing on what the consumer wants suggests the prospect of success. Further, the founders of MEMX, banks and asset managers are the consumers of the stock market data, as they use the stock information to carry out their business: the formation of MEMX is simply the result of consumers’ dissatisfaction with the current providers of market data.

In the short-term, MEMX will have to make a loss to challenge the long-standing trio (NYSE, Nasdaq and Cboe). Equity exchanges normally operate by paying brokers to post orders then charging them for fulfilling trades. However, MEMX, in an attempt to be a success, is planning to pay more in rebates (paying brokers to post orders) than it charges. To break into the market and gain market share is an essential move: like any challenger to the incumbent players, losses must be made, and risks must be taken. If MEMX is successful, it has the potential to not only increase the profits of those institutions which created it but to also lead a change in the structure of the exchange market. However, to be a long-term player and profitable in the face of competition, even though MEMX will not initially charge for market data or for joining the venue, the new exchange will have to charge later as it cannot afford to make a loss indefinitely. However, unlike the current exchanges, MEMX promises “simple and fair pricing” after this fee-free period ends, according to the Financial Times. The new exchange also has the potential to increase transparency and efficiency in the US stock market, one of the key reasons Blackrock has backed the venture, according to the company’s global head of market structure and electronic trading, Hubert De Jesus.

Whether this venture will be successful depends on a few key fundamentals. Firstly, whether the quality of the data is going to match the standards of the market incumbents. However, the data is arguably likely to be high quality as the groups which back MEMX are those which intend to use its data in their own business practices. Secondly, success also depends on the difference between the price MEMX charges consumers after its initial no-fee period and the prices charged by current market performers.

As can be seen in Figure 2, the inflation-adjusted increase of over 1000% over the 7-year period suggests that the data can be provided cheaper, considering the quality and quantity of data has not risen in the period to justify such a rise in price. As such, it is likely that after breaking into the incumbent’s market share, MEMX will arguably be able to operate efficiently and profitably compared to the current market trio when it finally does decide to raise prices.

As such, it is likely the economists dream of increased competition, efficiency and low prices for consumers will be fulfilled.