Earlier this month (February 2, 2021) the rideshare and delivery giant Uber announced its 1.1 billion USD acquisition of Drizly, an on-demand alcohol marketplace. Despite the modest size of the transaction, representing roughly 1% of Uber’s total market value, Uber’s shares rose around 7% upon announcement. As for Drizly, with a modest valuation of 73 million USD in 2017 according to an estimate from PitchBook, ‘Investors in Drizly will want to break open a bottle of Champagne’, according to the company’s CEO, Cory Rellas. More than 90% will be paid in Uber Stock to Drizly shareholders, with the remainder in cash. The deal is expected to close within the first half of 2021. Following the acquisition, Drizly will become a wholly owned subsidiary of Uber and will be integrated into the delivery app Uber Eats, albeit as a standalone brand.

With some calling it the ‘Amazon for liquor’, Drizly is a leading alcohol e-commerce platform that facilitates the delivery of a variety of beer, wine and spirits directly from local retailers. The Boston-based company, founded in 2012, has grown to become the leading on-demand alcohol delivery service in the US and is available in more than 1,400 cities. But unlike traditional delivery platforms, which usually charge a markup on the price, Drizly monetizes its services via a monthly membership fee to stores for using its platform.

This particular transaction, however, is not the only company that Uber has added to its basket recently. In December 2020, Uber completed its acquisition of Postmates in an all-stock deal valued at around 2.65 billion USD. The Postmates deal also arrived just months after Uber’s failed attempt to purchase online food delivery company Grubhub due to antitrust scrutiny. Grubhub was instead bought by the newly merged Just Eat Takeaway for 7.3 billion USD.

At the same time, Uber has offloaded some of its more cost-eating transportation segments. On December 8th, Uber sold its flying taxi unit Uber Elevate and just a day before this Uber also announced the selling of its autonomous driving unit Advanced Technologies Group (ATG) to Aurora Innovation. However, the ATG deal will see Uber invest 400 million USD for a 26% stake in the Aurora. Uber additionally transferred its electric bike and scooter business, Jump, to Lime in May.

The acquisitions and divestments mentioned are part of and in line with Uber’s shifting strategy, which is to focus predominantly on delivery and rides. Drizly plays into this strategy, as Uber CEO Dara Khosrowshahi highlights that ‘by bringing Drizly into the Uber family, we can accelerate that trajectory by exposing Drizly to the Uber audience and expanding its geographic presence into our global footprint in the years ahead.’ Acquiring Drizly also offers immediate dividends for Uber as Drizly has been set up to be fully compliant with local laws and regulations, which significantly reduces the risk associated with the deal and allows Uber to instantly offer a wide selection of alcohol products across the country within its Uber Eats app. This presents a key competitive advantage in the fight for market share.

Further, popularity for delivery services has exploded amid the pandemic and with year-on-year gross bookings surging more than 300% during 2020, Drizly is no exception. Similarly, Uber’s food delivery business proved indispensable in 2020, at a time when Uber’s core ride-hailing business had taken a backseat due to the lockdowns, which confined people to their homes and crushed rideshare demand. As a result and as depicted in Figure 1, the company’s Mobility revenues fell by 53% in the third quarter of 2020 year-on-year. However, Uber’s pivot and focus on its delivery business helped keep the company alive with revenues surging 125% year-over-year. 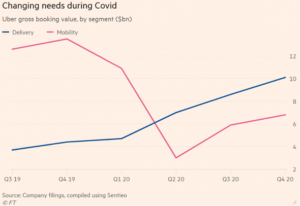 Figure 1. The surge in demand for Uber’s delivery services amid the pandemic.  Financial Times.

As for Drizly, the company plans to expand in its rapidly growing sector, while simultaneously gaining access to Uber’s advanced online marketplace technologies and innovations. Merchants on Drizly will also benefit from Uber’s massive customer base and best-in-class routing technology. Finally, Uber’s rewards programs will deliver greater value to its customers and provide even more ways to earn for delivery drivers.

Overall, assuming the two companies receive regulatory approval, the acquisition of Drizly adds an expansive and diversified offering for Uber and signifies its wager that demand for home delivery will persist after the pandemic subsides. Taking on Drizly will enable Uber to acquire an important foothold in the alcohol category, “giving it more ammunition to become the dominant player in local-commerce delivery”. Within this, the two companies can realise substantial synergies by cross-pollinating their ecosystems.