According to a recently published report by Lancaster University, the IT sector is directly responsible for between 1.8 and 2.8% of global greenhouse gas emissions. The report adds that because of supply chains, the majority of published estimates underestimate the carbon footprint of the sector by as much as 25%. For Big Tech firms such as Google, Apple and Facebook, this is largely due to the electricity needed to generate the firms’ data centres, some of which exceed 1,000,000 square feet. The combined power usage of the five largest tech firms exceeds 45 terawatt hours per year, roughly equivalent to the amount used in New Zealand. In an attempt to reach carbon net zero emissions despite the scale of their operations, Big Tech has established itself as the front runner in the green gold rush for renewable energy investments.

Google’s first clean energy deal in 2010, followed by the opening of Amazon Wind Farm Texas in 2017, is seen as the starting point in the rush to become the largest company for clean power purchases. “Once one of them started, all the rest followed, they always look at each other” said Eduardo Insunza, director of Global Strategic Customers at Iberdrola, a multinational electric utility company based in Bilbao, Spain. Among large companies, clean energy purchases have gone from 4.3 GW in 2016 to a total of 19.5 GW in 2019, highlighting the rapid growth in demand for renewables. 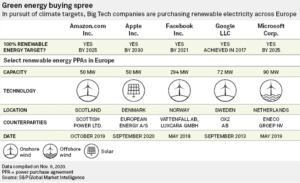 In December 2020, Amazon overtook Google as the world’s largest corporate purchaser of clean energy. This followed an earlier announcement from Jeff Bezos, company CEO, that Amazon had established a target of 80% renewable energy by 2024 and 100% by the end of 2025, as shown in Figure 1. The company struck deals for 26 new wind and solar projects across the globe with a total capacity of 3.4 GW. The new projects ensured that Amazon’s total investment in wind and solar investment projects totalled 6.5 GW, enough to power 1.7 million US homes for a year.

Amazon have previously come under environmentalist pressure after greenhouse gas emissions grew by 15% in 2019, likely owing to the addition of Amazon Web Services and delivery trucks to the company’s carbon footprint. The announcement from Mr Bezos that the firm was committed to net zero emissions by 2040 also failed to resonate with activists who noted that this was less ambitious than the conventional 2030 target.

Google, the world’s second largest purchaser of clean energy contracts with 5.5 GW of coverage globally, have established themselves as the most actionable when it comes to lowering the company’s carbon footprint. In 2019, the company signed 18 separate agreements to purchase more than 2.7 GW of clean energy, including a deal with Tennessee Valley Authority to purchase 1.6 million solar panels to run their data centres. “Google, I think, has been the most active…renewable energy is becoming a must have for them” said Justin FitzHugh, Vice President of business development at advisory firm Arctic Securities.

Other Big Tech firms such as Facebook and Apple have also committed to a green future. By the end of 2018, Apple had reached 100% renewable energy in its stores. The company, along with ten suppliers, have pledged 300 million USD in investment by 2022, a total of 1 GW of renewable energy. Facebook have also established themselves as a leading firm for clean energy projects, with a portfolio totalling over 3 GW in investment for renewable electricity. The social network site is currently on track to meet its 100% renewable energy goal by the end of this year, as shown in Figure 1, reaching 86% in 2019.

As a result of the burgeoning investment in clean energy projects, there has been a significant increase in the value of clean power stocks, which outperformed their traditional peers amid the COVID-19 pandemic. In the first quarter of 2020, US clean power stocks rose 2.2% while fossil fuels fell 40.5% compared to an S&P 500 drop of 9.4%. With solar energy projected to increase its share of global electricity generation from 3% today to 20% by 2050, renewable energy companies such as First Solar and Sunrun could be set to continue their upward trend from the surge in investment from Big Tech companies in the long-term while traditional oil and gas giants continue to flatline, as demonstrated by Figure 2.

Figure 2: Graph showing First Solar (Blue) and Sunrun (Yellow) have surged in the past year while Exxon Mobil (Red) and Chevron (Green) have flatlined. Yahoo Finance