OakNorth Bank Inc. is a digital bank that primarily lends to small and medium-sized companies, offering them financing solutions that are typically limited to larger firms who can access corporate banking services at traditional banks. In addition to loans and digital deposit products, OakNorth offers a forward-looking, cloud-based credit assessment platform that combines AI with big data to automate the credit analysis process. As of March 2020, this credit platform has been licensed to 17 overseas banks, with a total of 17.5 billion GBP assets under management (AUM). With the bank offering services to formerly under-served firms and performing strongly relative to fellow digital challenger banks, considering the investment thesis and potential risks is worthwhile.

Unlike many digital banks, OakNorth offers a sustainably profitable business with competitive historical revenue growth rates. Indeed, OakNorth’s profit doubled during 2019, having trebled the year previously. As one of the few digital banks that has become profitable, as shown in Figure 1, it successfully raised about 900 million USD over 10 fundraising rounds, the latest of which was led by Softbank and valued OakNorth at 2.8 billion USD. However, in 2020, OakNorth’s valuation underwent a significant reduction when Indiabulls Housing sold part of its stake at a 25% discount to Japan’s Sumitomo Mitsui Banking Corporation, lowering the value of the company to 2 billion USD. Whilst such a secondary share transaction would not affect OakNorth’s balance sheet, the valuation volatility may nonetheless be a cause of concern for existing or future investors, given that the bank is currently privately owned. 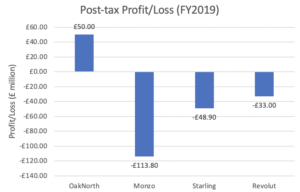 These problems are not unique to OakNorth, however, as competitor Monzo also suffered a 40% reduction in valuation during a 2020 fundraising round. These reduced valuations reflect a market-wide deterioration of investors’ confidence in digital challenger banks, many of which have sacrificed profitability in favour of growth. Some have even never generated positive cash flows since launching. In comparison, OakNorth reached break-even cashflow within 9 months and paid all accrued losses in its third year.

Furthermore, OakNorth was recently implicated by the Financial Times to be facing over 100 million GBP in defaults, the largest of which was a 41 million GBP loan to a luxury homes developer that entered administration in 2019. Whilst 96% of OakNorth’s loan book is collateralised and represents no more than 56% of the collateral assets, these defaults call into question the effectiveness of OakNorth’s credit platform and highlights the risk of relying on a particular sector. Indeed, 8 out of 10 defaults suffered by OakNorth in the past 5 years were linked to property development. Moreover, OakNorth recorded a provision for losses of just 1.9 million GBP in the 2019 annual report. Given that exposure was over 40 million GBP in 2019, the size of the provision may be insufficient to cover potential loan losses. The bank also failed to provide information on the income from the licensing of its credit platform to foreign banks and the group-wide financial position, both of which were suspected to be loss-making by the Financial Times’ research division.

OakNorth’s experience of default risks can also find parallels in the wider digital banking industry. Whilst Starling’s and Revolut’s monthly incomes reached break-even late last year, Monzo’s annual losses have widened – partly because of its relatively heavier reliance on transaction payments which have dropped dramatically due to lockdowns. By the same token, as OakNorth’s loan book is heavily weighted towards the property and construction sector, it is also exposed to diversifiable risks, just as Monzo is due to its reliance on transaction payments.

Nevertheless, OakNorth is a rare example of a digital challenger bank that has managed to generate profit whilst maintaining high revenue growth. In fact, OakNorth was nominated by the Financial Times as Europe’s fastest growing company in its 2020 FT1000 ranking. Despite over 100 million GBP of possible default exposure, OakNorth’s financial position should largely be protected by collateral. Beneficially, OakNorth has already stated that 4 out of the 10 defaults were fully recovered and it expects a recovery rate of 90% for the remaining distressed loans. In any case, as OakNorth looks to expand into the US market through its platform, it is worth following the bank given its success elsewhere and strengths relative to fellow digital challenger banks.