The Rise of the New IPO: SPACs

The traditional route for a company to go public is through an initial public offering (IPO). This is a long process whereby companies are required by the Securities and Exchange Commission (SEC) in the US or the Financial Conduct Authority (FCA) in the UK to disclose extensive financial and business information. More recently, an alternate method of flotation has gained popularity; merging with a Special Purpose Acquisition Company (SPAC). SPACs have no commercial operations; they are ‘blank cheque’ companies with the sole aim of acquiring, or merging with, another company, the target, to take public. The growth of this method offers benefits to companies that are planning to go public, specifically a shorter timeline and lower costs. However, investors must be alert to the lower levels of due diligence undertaken and any potential issues this fails to unearth.

Prior to acquiring the target, the SPAC will undergo its own IPO, which is expedited as the absence of commercial operations means there are no business activities to disclose to the SEC in the process. At this stage, the SPAC does not have to disclose the target company, nor does it have any requirement to have identified a target company. The proceeds from the IPO are then placed in an interest-bearing trust fund, which is untouched until a merger occurs. Before the merger can be completed, investors have to vote in favour of the decision. The target company then gains the SPAC’s ticker symbol and begins trading on the relevant stock exchange whilst the initial investors in the SPAC become shareholders of the target company.

SPACs were first conceived in the 1990s but have remained on the fringes of the financial world. A steady growth in popularity in the first half of the 2000s sharply declined in the lead-up to the 2008 financial crisis. However, since 2016, SPACs have increased in relevance and popularity. In 2016, IPOs of SPACs raised 3.5 billion USD across 13 IPOs. By 2019, 13.6 billion USD was raised in 59 IPOs. This figure subsequently rose to 79 billion USD in 2020 with 242 IPO transactions. 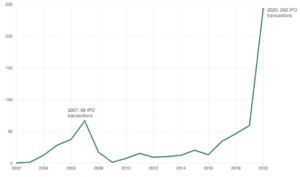 SPACs are direct descendants of the ‘blank cheque corporations’ of the 1980s which were instruments known for scamming investors, to the extent that the US Government passed a federal law to crack down on them. To combat this, when the concept of SPACs was conceived, they included additional safeguards to protect the investor. These safeguards include restrictions on access to capital; the IPO funds are only able to be withdrawn in the case of an investor approved merger or to repay investors. Additionally, SPACs have a liquidation window, whereby, if it did not complete a merger or acquisition within a certain time period, usually two years, it would be forced to dissolve and return the capital, with interest, to public stockholders.

Despite these safety measures, the recent sharp rise observed only started to begin once significant banks such as Goldman Sachs, Credit Suisse and Deutsche Bank began underwriting SPAC IPOs and dealing with these companies directly. These investment banks legitimised the SPAC method and encouraged less sophisticated retail investors to use SPACs as a way of generating returns in a low interest rate environment.

Luminar Technologies, a Texas based company specialised in creating advanced technology for autonomous vehicles, merged with Gores Metropoulos Inc. (a SPAC) in a deal valued at 3.4 billion USD in 2020. On December 3rd, 2020, after shareholders approved the deal, Luminar began trading on the Nasdaq under the ticker symbol LAZR. The CEO, Austin Russell, became the youngest self-made billionaire and vehemently defended the SPAC method of listing. “You go through the whole process end to end in four months, as opposed to having to spend huge amounts of time and distractions for the better part of a year or two.” Whilst the shortened timeline and reduced regulatory demands offers benefits, Russell did admit that Luminar Technologies waited until other businesses successfully listed using SPACs before committing.

Conversely, 2020’s SPAC listing of electric vehicle manufacturer Nikola offers a prime example of the potential risks this method can entail. Several months after the floatation, a report into the company discovered fraud within Nikola alongside a chequered history of its CEO, Trevor Milton. Professor Usha Rodrigues, of the University of Georgia School of Law, states “the flip side of making things easier for companies is inevitably the risk of fraud to investors go[ing] up.” The merger with the SPAC required a limited disclosure of company information leading to the past issues not being highlighted pre-public trading – the subsequent 64% share price reduction (from its peak) indicates the externalities that investors can suffer as a result of the SPAC method.

The first month of 2021 has seen the rise of SPACs continue. On January 25th, SPACs struck mergers worth 15 billion USD in a single day. David Solomon, CEO of Goldman Sachs, predicts that the rate of increase of these SPACs cannot continue. However, as the stock market continues to rise and retail investors participate at an increasing rate, SPACs could become a primary method of listing. They provide an express route to public stock exchanges and entail lower due diligence costs. Yet the primary risk is that SPACs enable companies to list that would otherwise be flagged in an IPO process. If SPACs become common, individual investors must alert themselves to this issue and ensure that their own due diligence is adequate to unearth any potential issues.