Are fast-tracked medicines a recipe for disaster?

March 8, 2021 / Comments Off on Are fast-tracked medicines a recipe for disaster? / Healthcare & Pharmaceuticals

The UK has long been criticized by the pharmaceutical industry for the slow rate at which the NHS receives new medicines. According to an analysis by Pfizer in 2017, the UK has a 75 per cent lower uptake of new drugs in their first year of release, rivalled by France, Switzerland, the US, and Germany. It is well-known that healthcare budgets in the UK are significantly under strain from ageing populations, the rising costs of care, which have now been exacerbated by the pandemic. There is therefore a hunger for innovation and impatience at the slow rates of approval, which have the potential to promise major benefits to both patients and the healthcare system.

The UK now strives to be within the top quartile of comparator countries for the uptake of innovative drugs to treat patients by the end of 2023, offering drug makers fast-tracked approvals in an attempt to revolutionise the pharma industry in the UK and retain the country’s position as a world-leading life-sciences hub after the pandemic and post-Brexit.

The UK’s medicine regulator, the Medicines and Healthcare products Regulatory Agency (MHRA), became independent of the European Medicines Agency (EMA) in early January 2021, meaning companies now need to apply separately to register their drugs under the new ‘Innovative Licencing and Access Pathway’, which offers the same speed of approval as the Pfizer/BioNTech COVID-19 vaccine, intending to cut the 10-year timeline of typical drug approval. The MHRA hopes this will provide them with a competitive advantage over rival medicine regulators, as leaving the EU led to concerns regarding the reluctancy of pharma companies to commit extra resources to the new regulatory process, only to access such a small market (only 3 per cent of global sales).

International competition is led by the US, approving medicines significantly faster than the EU. From 2009 to 2013, two-thirds of all drugs approved by the EMA and FDA were first submitted to the FDA, with an average 6-month shorter approval time, as shown by Figure 1. This has likely retained the US’ status as the world’s largest pharmaceutical market (48 per cent), generating more than 490 billion USD in 2019. While the EU has substantial potential, it lacks a competitive advantage, so the UK is undoubtedly using this opportunity for change to tap into a huge market. 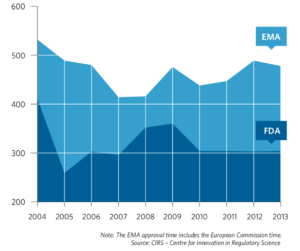 Figure 1. Graph showing the median approval times (in days) for new active substances at the European Medicines Agency (EMA) and the US Food and Drugs Agency (FDA). CIRS.

Despite the attractiveness of fast-tracked approval, there are many safety risks involved, with adverse long-term effects only emerging after the new drug is approved. A review of 112 fast-tracked drugs found the probability of serious safety issues was 34.2 per cent, with a revision rate for accelerated approval drugs at 7.15 per cent compared to 3.39 per cent for non-accelerated approvals, according to the Canadian Medical Association. Although fast-tracked approval provides patients with easier access to new and potentially successful drugs, it also gives them earlier exposure to harm.

The regulatory changes in the UK have also been accompanied by 160 million GBP of funding from the Government over four years to reinforce the 64 billion GBP life-sciences sector, as they recognise its importance to both the UK economy and the population’s health. Likewise, a close partnership has been established between early-stage venture funds such as the UK Innovation & Science Seed Fund and the life-sciences industry as they aspire to invest, validate and expand companies emerging from the UK’s research base.

Overall, Brexit and a post-COVID-19 era provide a unique opportunity for the UK to position themselves as world-leaders in the life sciences sector independent of the EU by revolutionising their regulatory process, but this change comes with risks and a need for thorough post-approval monitoring.