Big pharmaceutical companies’ credit ratings in the United States have been steadily dropping in the eyes of rating agencies since 2014. There have since been approximately 20 downgrades and only three upgrades among investment-grade firms. Despite these companies receiving acclaim for their rapid response to the COVID-19 pandemic, the strong barriers to competition in the industry, the relative insensitivity to the business cycle of these companies, and excellent profitability (average margins of 30 to 40 per cent, after accounting for the high costs of research and development), rating agencies expect further downgrades in 2021. This has three primary causes. The first is the expected increase in mergers and acquisitions activity, causing big pharmaceutical companies to shoulder increasingly heavy debt loads. There are also constraints on increasing patented drug prices in the US stemming from industry participants’ eagerness to improve reputations following recent scrutiny on drug prices. Finally, the Biden administration coupled with a democrat-controlled congress could introduce new legislation.

M&A has been driving most downgrades among investment-grade pharmaceutical companies in the last seven years. Acquisitions are often funded, at least in part, by debt, which increases credit risk that can outweigh any boost in business strength. While there are exceptions to this, such as Bristol Myers Squibb’s acquisition of Celgene in 2019 during which there was no downgrade (the companies A+ rating has not changed since 2007), the inverse is far more common. For example, AbbVie’s 2020 acquisition of Allergan resulted in a downgrade from A- to BBB+, and Bayer’s acquisition of Monsanto saw its rating fall from A- to BBB. Increasing debt-funded acquisitions have caused the median adjusted debt to EBITDA ratios in the industry to increase from 0.5x in 2010 to 2.0x in 2019, as shown by Figure 1.

To fund these acquisitions big pharmaceutical companies have been increasingly divesting non-core assets in areas such as generics, consumer health and mature branded drugs in order to fund acquisitions in growth areas like oncology and immunology. Merck & Co have announced plans to spin off many smaller drugs companies representing about 6-6.5 billion USD of revenue into a separate company called Organon. It will use the estimated 8 billion USD in proceeds for future M&A. Pfizer’s divestiture of Upjohn Co. to Mylan for 12 billion USD will be used to fund acquisitions of clinical-stage and pre-revenue assets to support the development of its pipeline. The latter of these resulted in a downgrade from A+ to AA-. The problem of these divestitures is that they do not result in meaningful deleveraging and, more importantly, reduce profits, scale, and diversity, which weakens business strength, consequently reducing creditworthiness. 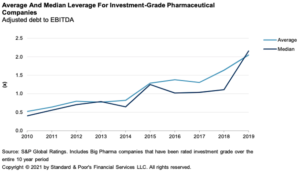 In contrast to the longer-term historical trends of annual price increases on patented drugs in the US, net pricing trends in 2021 are expected to be flat and, perhaps, nominally negative. As mentioned previously, this stems from self-regulation in the industry in order to enhance public relations. After years of being villainised, pharmaceutical companies are eager to show that they no longer ignore the implications of their pricing strategies on patients and societies. This will reduce the future profit growth going forward, consequently increasing debt to EBITDA ratios. Moreover, this constraint will be another factor contributing to an increase in M&A as managers will need to acquire companies to achieve the same growth that in normal times could have been achieved through price increases. As M&A, not R&D, increasingly becomes the way these major companies are reinforcing their drug pipelines, M&A can begin to be viewed as a form of margin pressure.

In 2006 Medicare Part D was introduced. It covered prescription drug benefits for US seniors and since its introduction growth in both out-of-pocket and payer spending on drugs significantly exceeds inflation. The absence of centralised price negotiations by Medicare and pockets of aggressive pricing by some companies has meant more and more US citizens are struggling to afford critical medicines. It is reflective of an ageing and unhealthy population where the obesity rate stands at 42.4 per cent. To rectify these issues the Biden administration will be drawn into passing legislation to reduce healthcare costs for individuals, an initiative that receives bipartisan support. Consequently, margins for pharmaceutical companies will be suppressed. However, given the very high current margins mentioned at the start of this article, this issue is minor and no legislation is likely to reduce the attractiveness of this industry to investors, unlikely to be a major issue in ensuring creditworthiness going forward.