February 22, 2021 / Comments Off on What Hong Kong’s Biotech Boom can Teach the UK about Listing Regulations / Healthcare & Pharmaceuticals

Hong Kong is experiencing a biotech boom. In 2020, new biotechnology listings in Hong Kong raised more than 6.4 billion USD, almost 100 per cent more than in 2019. This has continued into the new year as follow-on equity issuances (the sale of shares by already listed groups) by biotech firms listed in Hong Kong have hit 4.1 billion USD so far, equivalent to more than 60 per cent of the total raised by follow-on equity issuances for all of 2020 (see figure 1). The dramatic increase in investment has two primary causes. Firstly, China’s pharmaceutical industry, the second-largest in the world after the United States, has been boosted by increased government support for research and development since the announcement of the ‘Made in China 2025’ initiative. Launched over a decade ago it is essentially a blueprint to transforming China from the ‘world’s factory’ to a high-tech powerhouse and has encouraged an influx of venture capital and partnerships with Western drug companies. One high profile example is GlaxoSmithKline’s partnership with Shanghai-based Zai Lab. The second factor that has caused this boom is more subtle, but offers a powerful lesson to the UK in how to encourage the development of market-leading biotech firms – the regulation of capital markets. 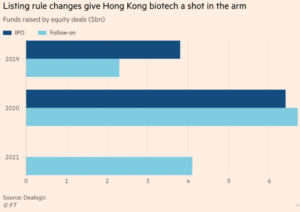 The boom in biotech listings on the Hong Kong Exchanges and Clearing Limited bourse (HKEX) began in 2018 following reforms that allowed biotech groups with no revenue to go public for the first time. It also allowed dual-class share structures. Since then, listings on the HKEX have accounted for almost 25 per cent of the 54 billion USD raised globally by biotech firms in this period. More importantly, for the future of the HKEX at least, in 2020 non-Asian cornerstone investors (investors who, in return for a large allocation, agree not to sell their shares within six months following the IPO) bought up a record 46 per cent of shares in each biotech IPO in Hong Kong signifying confidence in the market. Charles Li, the outgoing chairman of HKEX, says he expects listings for biotech companies to surpass Nasdaq in the next five to ten years.

This contrasts with the strict requirements in the UK. To receive a premium listing in the UK (which means the firm is eligible for inclusion in the FTSE indexes and therefore shares are purchased by index funds) the firm must list at least 25 per cent of its equity and only have one class of shareholder, sticking to the FCA principle of ‘one-share-one-vote’. The advantage of having multiple classes of shareholders is that it allows individuals with minority stakes to maintain control of the company through shares with enhanced voting rights. One recent example is US tech company Palantir. Even if the owners’ combined stake fell to only about 6 per cent, the use of a special F class of shares gives them at least 49.99 per cent of total votes. By not allowing this share structure the UK hopes to keep its premium listings as the gold standard for investors. However, many entrepreneurs hope to keep control of their companies and subsequently this system acts as a disincentive for innovative UK companies to list on London bourses.

The case of Hong Kong provides an example for the UK. The most promising UK biotech firms are frequently being bought out by major international competitors. The most notable recent example was Bristol-Myers Squibb’s 90 billion USD acquisition of Celgene. By opening up capital markets and allowing entrepreneurs and earlier investors to retain control of companies, the UK can increase its influence in the biotech sector and reduce the dominance of the large oligopolies that exist in the pharmaceutical industry. The recent government assessment of current regulations during the Solvency II review is expected to reduce the minimum for a premium listing down to 10 per cent of a company’s shares. Allowing a dual-class share structure is under debate. Hong Kong provides an example that such a strategy can be hugely influential in enabling high-tech companies, and biotech firms in particular, to develop.