Could Flying Taxis Be the Future?

February 28, 2021 / Comments Off on Could Flying Taxis Be the Future? / Industrials, Automobile & Aerospace

London drivers waste around 9 days sitting in traffic every year whilst commuters in Los Angeles or Sydney, each stuck for 7 days, are not far behind. It is clear that the infrastructure of major cities is reaching breaking point, but some firms claim to have the answer to the problem, utilising Special Purpose Acquisition Companies (SPACs) to take their flying taxi firms public.

Archer became the first electric aircraft manufacturer to do this, going public with Atlas Crest, a SPAC led by banker Ken Moelis, in a deal valuing Archer at 3.8 billion USD. Despite not yet having a prototype, the company claims its taxis will travel at 150mph for up to 60 miles. These assertions have impressed United Airlines which has placed an order reportedly worth 1 billion USD. Under the terms of the deal, Atlas will invest around 500 million USD into the firm with an additional 600 million USD coming from a group of investors which include Fiat Chrysler’s holding company Stellantis. Their involvement could be key to Archer’s success as access to Fiat Chrysler’s supply chain could significantly lower manufacturing costs.

LinkedIn co-founder Reid Hoffman and tech entrepreneur Mark Pincus are also planning on merging their SPAC, Reinvent Technology Partners, with Joby Aviation in a larger deal which values the firm at 5.7 billion USD. Unlike Archer, Joby has a functioning prototype, as show in Figure 1. The prototype has had more than 600 successful flights and aims to seek certification to fly by 2023. Joby’s acquisition of Uber Elevate, Uber’s flying taxi division, meant the firm also received over 125 million USD from Uber, funds predominantly used to develop the prototype. 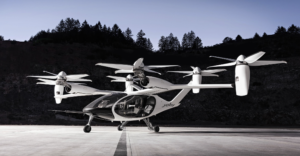 Large investments like these may signal a vote of confidence from Wall Street, but the reality is that the flying taxi industry faces many practical obstacles. Most electric vertical take-off and landing (eVTOLs) taxis are too noisy to pick up passengers outside their homes and as a result these services will initially operate at fixed take-off and landing pads – infrastructure which requires yet more large investment. There are also multiple air traffic control and legislation difficulties on the horizon, with regulators examining everything from air traffic control, to noise pollution, to software security.

However, the largest challenge could be convincing passengers that the technology is safe. The European Aviation Safety Authority has already determined that manufacturers will have to demonstrate a failure rate of less than one every billion flying hours; the same requirements for commercial airliners. Backup rotors, engines, batteries and flight control systems are all being incorporated into the designs, safety features which will please both regulators and potential customers.

Fortunately, the certification process will not involve billions of hours of test flights, but rather rely upon the safety history of existing components, which is a lifeline to firms who know that reducing costs could be critical to commercial success. At the moment, the cost predictions for a journey from central London to Heathrow would be around 150 GBP, whilst other industry insiders draw comparisons to the cost of first-class rail tickets. Prices like these may be initially too high for the average consumer, but they are expected to drop as companies scale.

Deloitte, a consultancy firm, predicts these various obstacles could be overcome relatively quickly, suggesting that the US market will be receiving revenues of 115 billion USD by 2035. Morgan Stanley goes even further, suggesting that globally the market could be worth 1.5 trillion USD by 2040. These forecasts largely depend on the ability for manufacturers to cut costs and therefore make their service an attractive alternative for mainstream consumers. The cheaper the service, the larger the potential customer base and the more likely flying taxis will be a significant part of the future.