Japan and Australia are primed to lead the global hydrogen agenda

February 28, 2021 / Comments Off on Japan and Australia are primed to lead the global hydrogen agenda / Industrials, Automobile & Aerospace

International and strategic cooperation between Australia and Japan has been commonplace for the last couple of decades; complementary R&D propensities alongside shared priorities within the technology sector are just a few factors that have resulted in the formation of this strategic alliance. With global warming a rising issue that is becoming a key vocal point behind varying government agendas, it appears that the ushering of an energy transition is gaining further traction across a plethora of geographies. Specifically, the multinational Canberra-Tokyo effort to forge a cost-effective supply chain to source clean hydrogen-powered energy is seen as a progressive step towards the abolishment of carbon dioxide-producing facilities.

The commitment from Australia stems from its illustrious industrial beginnings which is intertwined with the lignite mines in the country’s Latrobe Valley. Since its inception, industrial fumes emigrating from this geographic location have accounted for the emittance of 130 million tonnes of carbon pollution, according to data analysis performed by the National Pollution Inventory. The magnitude of such has led to an increase of pressure placed upon Australia’s energy companies, including AGL and the associated Loy Yang power station, to hasten the abandonment of coal fired plants as climate concerns increasingly invoke stakeholder activism. Economic incentives to establish the Japanese collaboration also includes the mass job generation, approximately 7,600 jobs by 2050, accompanied by upskilling efforts and the securitisation of an increased export market. The upscaling effort within Australia goes beyond that of the project located 120 kilometres east of Melbourne. Indeed, there are approximately 23 hydrogen specific demonstration projects and research facilities currently occupying Australian territory.

Meanwhile, Japan’s conscious efforts to rectify its contribution to climate change stems from the lack of aggressive action arising from several governmental policies, including that of the 2013 national climate plan. Japan has since set the target to achieve a completely hydrogen society by 2050. The instalment of government subsidy programs and the introduction of funding within the commercial and corporate finance sphere has added further traction to these efforts. 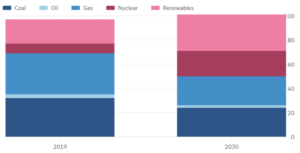 Figure 1: Bar chart showing the anticipated change in the share of energy mix employed by Japan from the year 2019 to 2030. Financial Times

Despite other ESG avenues potentially presenting a more affordable and strategic alternative, Japan’s commitment to hydro power is powered by the intermittent nature of said alternative methods. Like Japan, this has prompted various nations to pursue differing processes involving hydrogen to store, dispatch and ship power when called upon. In fact, national efforts to integrate hydrogen is exemplified by the country’s plans to produce 800,000 hydrogen vehicle units by 2030, which represents more than a 21,000% increase on units sold by the end of 2019. An increasing focus on hydrogen is also supported by Japan’s densely populated mountainous terrain and steep continental gradient which both propose significant obstacles to renewable energy generators such as solar farms and offshore wind farms. The aftermath of the Fukushima disaster in 2011 has also decreased the government’s sentiment to invest within the nuclear power industry, pivoting the country further towards a hydrogen-fuelled energy transition, as shown in Figure 1.

Specifically, the companies elevating the Canberra-Tokyo project to greater heights believe that the consortium will act as a catalyst in building the foundation of a global hydrogen economy, which is forecasted to generate up to 11 trillion USD, according to Bank of America. The venture, which is funded by both nations’ governments, includes the advancement of the world’s first liquid hydrogen transport carrier ship, the ‘Hydrogen Frontier’. The vision for the project encompasses the gasification of brown coal within Australia to produce low-cost hydrogen, which will then be transported to Japan via tankers, subsequently distributed nationwide to filling stations to be utilised by vehicles. The vision is in place and the reliable partnership between Australia and Japan might offset certain trepidations associated with an intercontinental supply chain. However, as Shell New Energies executive Vice-President Elisabeth Brinton highlighted, transforming hydrogen into a novel global commodity will involve the setup of an entirely new infrastructure to successfully incentivise the demand side.

Ultimately, this 500 million USD conglomerate between Japanese and Australian waters is a stimulating prospect as the battle to capture and create the world’s first zero emission energy supply chain intensifies. The propensity of the partnership to realise the shared vision will be an important factor in deciding the fate of industrial markets and countries’ economic growth prospects, as the renewable energy sector continues to contribute to the decarbonisation of the future.