SPACs: What are they and why could they be crucial to the electric vehicle revolution?

February 28, 2021 / Comments Off on SPACs: What are they and why could they be crucial to the electric vehicle revolution? / Industrials, Automobile & Aerospace

US electric bus maker Proterra was the latest electric vehicle company to go public, announcing a deal worth 1.6 billion USD in the middle of January. However, the firm will not be listed on the Nasdaq exchange as a result of an initial public offering (IPO). Instead, Proterra opted for a faster route and merged with the Special Purpose Acquisition Company (SPAC) ArcLight Clean Transition Corp.

A SPAC is a publicly listed company with no commercial operations, formed solely to raise capital via an IPO for the purpose of acquiring an already existing private company. SPACs do not have to state a target for acquisition, but once formed they usually have two years to complete a deal or investors, who typically buy in for 10 USD a share, will see their money returned.

Lucid Motors and Faraday are more examples of electric vehicle companies reportedly in talks to merge with a SPAC as the firms look to avoid the costly and slow roadshows usually accompanying an IPO. SPACs also provide more information about their acquisition target to investors than if the company was to go public using an IPO, a factor enabling investors to make a more informed decision and potentially sell out before any acquisition is finalised.

Whilst SPACs have been around since the 1990s, their popularity has started to increase rapidly as a result of several high-profile success stories. For example, Richard Branson partnered with venture capitalist Chamath Palihapitiya’s SPAC called Social Capital Hedosophia Holdings to take Virgin Galactic public in 2019. Palihapitiya’s SPAC initially purchased 49% of Virgin Galactic for 800 million USD but the firm’s market cap is now 10 billion USD – a return of 1250%.

A desire for high returns like these has dramatically increased investments in SPACs, as shown in Figure 1, especially amongst electric vehicle manufacturers. Nikola, Fisker, Lordstown Motors and Canoo all used SPACs to go public in 2020, taking advantage of investors willing to provide capital to companies participating in the ‘electrification revolution’. The Bank of America calculates that 6 billion USD has already been raised for electric vehicle SPACs in 2021, with newer market entrants able to access seemingly unrestricted access to low-cost capital that can be used to fund rapid product development to catch up to established firms. 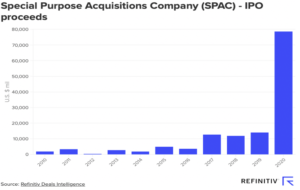 Later entrants to the electric vehicle market are also benefitting from a drastic change in attitude towards electric power from both customers and legislators. The US Green New Deal indicates a tightening of rules surrounding carbon emitting cars whilst the UK is planning to outlaw the sale of new gas and diesel-powered vehicles by 2030. The UK’s ‘green industrial revolution’ plan also includes 774 million GBP in grants to incentivize buyers low-emission vehicles – allowances manufacturers are hoping will drive further market growth. In order to take advantage of these changing attitudes, electric vehicle manufacturers will need to have a sophisticated product to sell to consumers. With the development process both slow and expensive, many companies are turning to SPACs to source financing in order to speed up their product launches.

However, electric vehicle companies are still struggling to turn a profit. Of the 18 electric vehicle related companies that have merged with SPACs (or are planning to) since 2020, eight have little or no revenue. Whilst this may be expected if firms are still in the development phase, analysis by the Financial Times suggested that two thirds of SPACs which completed acquisitions between 2015 and 2019 are underperforming their IPO price, an indication that some investors are losing confidence.

Despite this, there are few methods of raising low-cost capital quickly that can match a merger with a SPAC firm. Over 210 SPACs are currently public without an acquisition target, which is a further indication that despite some investors losing confidence, 2021 could yet be another SPAC record breaking year which aids the ‘electrification revolution’.