When will the Tesla bubble burst?

February 2, 2021 / Comments Off on When will the Tesla bubble burst? / Industrials, Automobile & Aerospace

In 2020, the American vehicle company, Tesla Inc, surprised the automobile market by producing 509,737 cars and averaging an increase of 36 % in total sales. Consequently, Tesla’s share price rose more than 720% for 2020 reaching a record high of 2021.83 USD per share. However, the announcement of a 5 for 1 stock split on 31st August 2020 stabilised the stock price at around 640 USD. In early January, Elon Musk, CEO of Tesla Inc, became the richest person in the world while Tesla’s share price gained another 20% in the first week of 2021. Such a fast rate of growth raises the question of whether this is a case of a market bubble and whether growth will continue.

To predict a future price fluctuation in Tesla’s stock, it is worth comparing Tesla’s scale to other automakers. A market capitalisation comparison can be seen in Figure 1, which highlights Tesla’s outperformance of other automobile companies. For instance, General Motors has a market cap of 44.458 billion USD against 286.56 billion USD for Tesla, representing a 5 times higher market cap. The main reason for this difference is Tesla’s innovation. 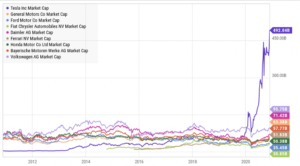 However, the general optimism surrounding Tesla is beginning to decrease in the face of rising competition from other automobile companies, such as Ford, which are starting to take the electric vehicle (EV) market seriously. For example, Ford’s new electric model, the Mustang Mach-E proposes a similar fashionable design to Tesla and will also have its own charging stations. Furthermore, Apple announced its own electric vehicle that would be available in 2024. The arrival of new competitors in the EV market has the potential to redirect some Tesla investors to other EV and automobile firms. Thus, it is possible that there will be a price collapse in Tesla’s stock going forward.

The argument that Tesla’s rise in share price might be bubble is supported by Rob Arnott, founder and CEO of Research Affiliates, who states  “When you have Tesla trading for more than the entire rest of the auto industry, excluding companies that deal exclusively in electric vehicles… what you are looking at is an extraordinary spread in valuations”. However, it is also possible that Tesla continues its development over the next few years and hence does not collapse. This is a possibility only if Tesla continues leading innovation in the EV market and retains a competitive advantage through superior technology and fashionable design.

It is also worth considering Tesla’s share price fluctuation in the short term from one month to a year. Using technical analysis, it is clear from Figure 2 that a selling gap was created on this weekly chart. Generally, a selling gap is a large downward jump in asset prices. This gap was created on 31st August 2020 as a reaction to the 5 for 1 stock split, which diminished Tesla’s share price. However, it is almost always true that the price needs to close that gap in an upward trend. From Figure 2, this gap will close at a minimum of 1382 USD. Tesla will consequently hit at least 1382 USD in the following years or months. However, technical indicators in smaller time frames such as (H1) /(H4) which represent price fluctuation hourly, points out at a correction around 663 USD. Therefore, technical analysis verifies the assumption of Tesla’s long-term growth.  Consequently, Tesla has the potential for continued growth for the year to come.

Tesla appears to be at the prelude of a long-term share price growth. However, this may be affected by an increasing number of competitors within the EV market. Combining technical analysis with Tesla’s economic market data underlines that the bubble is still in place and might continue until reaching a price of 1300 USD per share.