Big data allows large amounts of data to be processed and stored. This process would be extremely difficult using traditional methods which involved decisions being made based on a combination of intuition and traditional, retrospective data. Today, new variables and technology make it possible to more accurately predict a location’s future risks and opportunities.

John D’Angelo, real estate sector lead at Deloitte, the professional services firm, stated that “real estate has traditionally been a late adopter in tools and technologies”. The past few years, however, have seen the emergence of many technology start-ups which are utilising Artificial Intelligence (AI) tools to support vital real estate decisions. Traditional real estate insights include factors such as price, area population growth and nearby schools. However, big data permits insight into many non-traditional factors such as the amount of light a home receives throughout the day, residents’ preferences for gym equipment and levels of noise population within a neighbourhood.

A report published by consulting firm, McKinsey, illustrates the importance of big data when it comes to house prices. In Boston, the prices of homes within a quarter mile of a Starbucks jumped by more than 171% between 1997 and 2014, this is 45% more than the average. In Seattle, apartment buildings within a mile of specialty grocery stores appreciated faster in value than those that were not. Although one may assume that the impact of the proximity of a grocery store is intuitive, data analysis allows us to see that this is not always the case. For example, having two specialty food stores within a quarter of a mile correlates with an increase in property prices whereas having four of them within that same distance correlates with lower prices. These nonlinear relationships are not specific to one location, but rather observed across many cities in the US.

Being slow to identify trends in the market leads to missing out on potential profits, as being a first mover on a compelling opportunity translates into a significant advantage. Through the use of traditional methods, analysts must work through thousands of data points to discern clear patterns and place their bets with just a few supporting tools to help gain insights. Many times, by the time the data has been collected, compiled and processed the best opportunities have already gone. Unconventional data sources, such as mobile phone signal patterns, are becoming increasingly relevant to help identify ‘hyperlocal’ patterns. McKinsey stated that nearly 60% of predictive power can now come from non-traditional variables as shown in Figure 1. 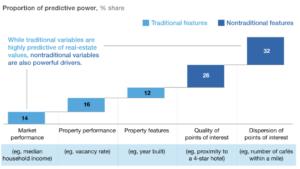 Machine learning facilitates the process of compiling data that has been collected. It is not raw data that creates value, but the ability to extract patterns from this data, in order to make forecasts and predictions, and design new market-entry strategies. These strategies then can be used by developers or asset managers. For example, in the case where an asset manager wishes to expand their portfolio of multifamily buildings, machine learning algorithms can rapidly combine macro and hyperlocal forecasts to highlight cities and neighbourhoods with the highest demand for multifamily housing. Therefore, machine learning serves as a tool to support the development of investment hypotheses.

Data driven approaches in real estate have had a big impact in the US. In one example, an application combining a large database of traditional and non-traditional data was used to forecast the three-year rent per square foot for multifamily buildings in Seattle. These machine learning models predicted rents with an accuracy rate that exceeded 90%. Figure 2 illustrates how using non-traditional metrics can differentiate projects that otherwise appear to be very similar. Buildings 1 and 2 have similar rents per square foot, similar size-adjusted rents to the zip-code average and identical vacancy rates. Further analysis of non-traditional variables using an AI-driven approach shows that building 2 is a much more attractive investment. In this particular example, non-traditional metrics accounted for 60% of the change in rent. 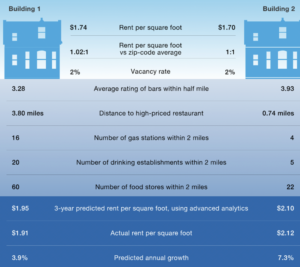 Building advanced analytics into a portfolio is a complex task, as collecting large enough data sets to construct accurate algorithms takes long periods of time. Relatively few firms are able to achieve this on an efficient scale. The real estate industry is slowly seeing a shift to non-traditional data as its predictive power is too great to ignore. Progress in Artificial Intelligence is frequently exponential rather than linear, if companies fail to act now, they run the risk of adapting too late.