How might the Government’s plan for leasehold property reform affect the UK housing market?

February 2, 2021 / Comments Off on How might the Government’s plan for leasehold property reform affect the UK housing market? / Real Estate & Construction

On January 7th, 2021, the UK Government announced their intention to improve the leasehold system, pledging to implement reforms proposed by the Law Commission in a report published last July, with these having the potential to benefit up to 4.5 million leasehold owners.

In recent years, the leasehold system, which has its roots in feudal England, has faced significant issues. A 2019 investigation conducted by the Competition and Markets Authority (CMA) found “worrying evidence” that people who buy leasehold properties are being misled and taken advantage of. A standout issue cited by the CMA investigation is the ‘leasehold trap’, in which leaseholders are charged inflated ground rents; a concept involving the leaseholder paying an annual sum to the freeholder. Moreover, extending a lease or buying out a freehold does not often come without punitive costs. With leaseholders fixed in place, they are rendered virtually impuissant under payment of these fees.

Under the proposed changes, ground rents for new leases will be reduced to zero, which will effectively abolish the system. This allows leaseholders to purchase a freehold more cheaply. Leaseholders will also be given the right to extend their lease by a maximum of 990 years, in comparison to current law which pins the maximum lease extension at 50 years with a ground rent for leaseholders living in a house, and 90 years with zero ground rent for leaseholders living in a flat. Furthermore, the practice of adding a ‘marriage value’ to the cost of buying a freehold property is to be abolished. If a lease has less than 80 years to run, landlords can ask leaseholders to pay 50% of the expected uplift in the property value, the ‘marriage value’, on the grounds that the leasehold and freehold interests are ostensibly worth more when held by one party than when held separately in the hands of a leaseholder and landlord.

Pending this proposed reform, significant changes will need to be made to what is very complex legislation; as such it is estimated that it could take at least a year for the reform to be finalised. Consequently, many buyers and leaseholders may choose to bide their time in the belief that purchasing a freehold will become cheaper, but ultimately, one’s decision lies with their personal forecasting of house prices over the coming years. Strong price growth would of course lessen any financial benefit from the reforms. As such, the magnitude of the impact that reforming the current leasehold system will have on the housing market is largely dependent on how property prices fare in 2021.

House prices in the UK rose by 0.8% between November and December 2020, bringing the annual growth rate up from 6.5% to 7.3%, according to Nationwide Building Society’s index. This left prices 5.3% above their March 2020 level, when COVID-19 first began to affect the UK. In particular, the introduction of a temporary stamp duty holiday in July 2020 has caused many people to pre-empt their moving plans in order to beat the holiday’s March deadline. Saving buyers up to 15,000 GBP in property taxes, the stamp duty holiday resulted in increased sales and an upturn in prices.

A more direct impact as a result of the COVID-19 pandemic has been an increase in demand for outdoor space. The UK’s prime residential market has witnessed a surge in activity during 2020, according to data from real estate agent Savills. The index shows that a 2 million GBP country house has added an average of 111,000 GBP to its value during 2020, whereas a flat or small terraced house of similar value in central London has fallen in value by an average of 8,000 GBP. Data from TwentyCi reveals that the number of sales above 1 million GBP that were agreed in the 11 months up to November 2020 were 29% higher than that of the previous year. 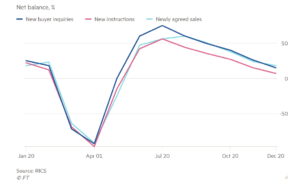 With COVID-19 drawing buyers away from central London, leaseholders considering purchasing a freehold in this area stand in particularly good stead, as decreasing central London property prices converge with the added financial benefit of a cheaper freehold purchase under the new reform. Yet above all, in recent months there has been clear evidence of the UK housing market losing momentum, seen in Figure 1, and having entered a new national lockdown, house prices are unlikely to increase sharply in the near future. It is therefore likely that many leaseholders will extend their leases or purchase a freehold in the final quarter of this year, or in early 2022.