In January 2020, Facebook announced plans to hire 1,000 staff to fill its new London headquarters near Oxford Street. By May, Facebook, Twitter and Square had allowed many of their staff to work from home for an indefinite period of time, with Mark Zuckerberg suggesting that within the next ten years, half his company’s workforce will be based at home. The number of workers working from home was estimated to be around 30% in the US before the pandemic struck, this number has now jumped to over 80%. Working from home allows for more flexible and output based work rather than workers having to stay for a specific number of hours in the office per week. This is likely to lead to a change in the way people view and use corporate real estate.

According to the KPMG 2020 CEO Outlook, 77% of CEOs reported they will continue to build on their current use of digital communication and collaboration tools, while 73% of CEOs believed that remote working has widened their available talent pool. “The pandemic has given CEOs a clear sense of what is possible in the future of work,” says Nhlamu Dlomu, Global Head of People at KPMG. “Organisations have, as a result of sheer necessity, made decisions faster, collaborated better, adopted new technologies faster and even eradicated long-standing hierarchies and silos. But the challenge now is to sustain those improvements over the long term.”

The trend towards shorter office leases has accelerated in the past year as firms are being cautious while making long term decisions, and many occupiers approaching the end of their lease are negotiating to reduce lease terms in order to mitigate future unknowns. Data from Global Property Consultancy, JLL, indicates that the average office lease in the UK is 6 years, this being even shorter in Hong Kong at just 3 years in length. The same data highlights that in the first 5 months of 2020 the average lease length in the US fell 15% to 7 years.

Office leasing momentum in Hong Kong remained weak in Q3 2020 according to real estate advisor CBRE. Although this was a 36% increase on the previous quarter, this is just half the quarterly five-year average for Hong Kong. Furthermore, leasing transactions by banking and finance firms fell by over 50% quarter on quarter, and total vacant office space reached 7.8 million sq. ft, a level that was last seen in 1999. In the UK, Savills’ commercial report shows that commercial investment volumes reached 7.2 billion GBP in Q3 2020, up 55% on Q2, which saw one of the lowest volumes ever recorded. Q3 was still half the two-year quarterly average. By contrast, in Paris, a 10% increase in vacant office space was observed from Q2 2020 to Q3 2020 where office space totalling 3.3 million sq. ft was empty. Lastly, in New York, the average lease term at the city’s largest office landlord, SL Green, fell from 10.1 years down to 4.3 years in just one year. Figures by JLL show approximately 3.1 million sq. ft of leases in New York closed in Q3 2020, representing a 44.9% decrease based on the same period last year. Figure 1 shows the total commercial property vacancy in New York. 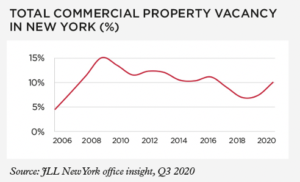 It is likely that demand for commercial property will re-emerge after the pandemic, but not in the same format. It has been established that people do want to work from home – perhaps for one or two days a week – but people also face challenges working from home such as the lack of collaboration and interaction seen in office environments. Some argue that the lack of ‘collisions’, spontaneous moments during which ideas are created, over teleworking software will lead to lower medium to long-term innovation. Figure 2 shows that financial and business services, as well as the banking sector account for almost two thirds of demand for office space – these firms are well-placed to adopt change as they do not rely on the same creative synergies between workers as advertising agencies, for example. There is likely to be a balance between remote working and traditional office use, but this does not necessarily equate to a smaller office footprint. Offices will still need to cope with peak demand days, and the removal of the requirement to commute everyday may actually mean that staff are prepared to travel further. We are likely to see employers looking for spaces that allow for flexible working, are focused around collaborative spaces and more of a focus on both mental and physical wellbeing, although these are not new trends, COVID-19 has accelerated them. 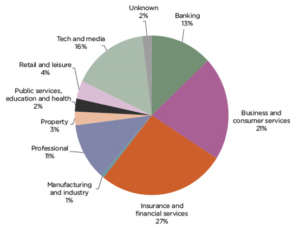 Ultimately the shape of the global office sector is uncertain. Digital technology advances and workplace behavioural changes, catalysed by the pandemic, suggest that people no longer need an office hub to work from. However, many employees have mixed feelings when it comes to their long-term work arrangements. Meanwhile, real estate categories are blurring. British department store John Lewis and European shopping centre giant Unibail-Rodamco-Westfield are among those converting retail space to co-working. In addition, European hotel company AccorHotels aims to establish 1,200 flexible working spaces across its estate by 2022 and a number of flexible workspace specialists are continuing to expand, despite the travails of WeWork. In many ways, this trend also reflects a ‘back to the future’ vision of people working closer to home and it may be this, even more than COVID-19, that remodels cities for the 21st century.