Is the UK housing market losing its momentum?

January 17, 2021 / Comments Off on Is the UK housing market losing its momentum? / Real Estate & Construction

This year has seen the UK house price index reach its highest point since 1999. UK house prices increased by 4.7% over the year to September 2020 with the average house price in London now 496,000 GBP. This is primarily due to the stamp duty land tax holiday which provides relief up to a 500,000 GBP threshold and ends in March 2021. September 2020 saw the largest UK house price growth since October 2017, as shown in figure 1. August saw a record number of transactions, 84,190, compared with 82,830 in February, the month before the first lockdown. As city dwellers sought to move out of urban areas to more rural regions, demand for UK property increased further. 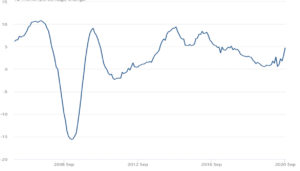 However, the UK housing boom is showing signs of losing its momentum; the interest from new buyers in recent months has decreased. Even though the house price index has been relatively high, the Royal Institution of Chartered Surveyors reported a substantial fall in new buyers last month, while the majority of real estate agents predict weaker sales in the year ahead. In November, UK house prices increased by 0.9%, this is the smallest monthly rise in prices since July. Although prices have continued to rise, the rate of growth can be expected to slow down in the coming months. One reason for this is that the stamp duty holiday is coming to an end and it is unlikely that properties purchased after January 2021 will be able to benefit from the holiday due to the processing times for estate agents. Significant backlogs arose earlier this year as estate agents became inundated with buyers and saw the home-buying process become slower as staff switched to working at home.

Another reason for the loss of momentum within the UK housing market is unemployment. Current UK unemployment is 4.8% as of November, up from 4.5% three months prior. Forecasts published by the Confederation of British Industry estimate unemployment will peak at 7.3% in the second quarter of 2021 which is likely to continue to have a negative effect on UK house price growth. There is a correlation between high unemployment and underperforming property prices. Within the UK the 10 areas with the highest unemployment have seen growth of just 10% since 2007, less than half the national average of 35%. As unemployment increases, consumer confidence decreases. Paired with a lower level of disposable income, this means it is very unlikely buyers will choose to purchase property en masse. The fear of unemployment is just as likely to discourage an individual from buying a house as unemployment is itself, given they may doubt their ability to meet future mortgage payments.

Of the four nations within the United Kingdom, England has seen the largest increase in house prices over the past year – 4.9% – while Wales has seen an increase of 3.8%, Scotland 4.3% and Northern Ireland 2.4%. Furthermore, rules regarding property vary in all 3 regions. In England and Northern Ireland properties up to the £500,000 mark were exempt from stamp duty, but in Scotland and Wales this amount was set at £250,000. It is evident from figure 2 that although all countries follow relatively the same trend, there are still variations between them. Therefore, the UK cannot be judged as a whole, as different regions within the UK experience different activity. 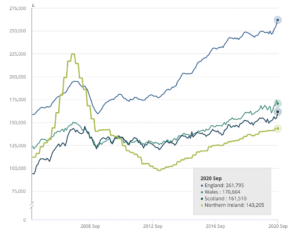 The extent to which the UK housing market is losing its momentum, if at all, is a value judgement and requires perspective. Figure 2 reveals that after September 2008, house prices initially rose, then reached a natural plateau. If we take this as the definition of ‘losing momentum’ then the Chancellor’s stimulus packages, such as the stamp duty holiday and furlough scheme, are likely to guide today’s house prices in the same pattern. This does come with a caveat, however. Economists and statisticians can do their best to predict outcomes, but especially in times of heightened uncertainty these predictions can be wrong. Therefore, until a permanent slowdown in momentum is seen, any final judgement should be read with the understanding that it could be incorrect.