Boris Johnson’s call for a “revolution” in home ownership has not been taken well by the UK mortgage market. The prime minister said that there could be 2 million more homeowners in the UK through a big increase in long-term, fixed-rate mortgages involving low deposits for first-time buyers.

The prime minister was keen for banks to offer 95% loan-to-value (LTV) deals, however this was approached in a very cautious manner by lenders. The availability of high LTV mortgages has shrunk dramatically since the start of the pandemic, this is largely due to the bleak economic outlook, rising unemployment and rising regulatory costs. 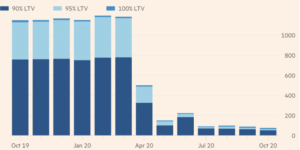 Figure 1 shows the number of mortgage deals with >90% loan to value. Moneyfacts via FT

As shown in figure 1, since the UK went into lockdown in March, the number of banks willing to offer more than 90% LTV has fallen by more than 90%. In addition, the few companies that are offering these high LTV deals are charging extremely high interest rates in order to compensate for the risks. This is evident in figure 2, which shows 95% LTV mortgage interest rates were at 3.9% in August. HSBC was the only one of the ‘big four’ high-street banks to still offer 90% mortgages earlier this year, but has since revoked the offer for new borrowers due to extreme demand. Indeed, brokers at HSBC reported that they frequently reach their daily quota for 90% mortgage applications before 9am.

The UK is currently experiencing a ‘housing price boom’ due to the stamp duty holiday, but eventually house prices will fall, most likely in 2021, and it is predicted that it will take over 2 years for the market to recover from this decline. A severe fall in house prices could leave borrowers with small deposits, owing the banks more money than the house is worth. Consequently, there is the possibility of a new generation of ‘mortgage prisoners’ implying that they are unable to leave their current mortgage due to their financial condition.  This is likely to lead lenders to be very wary of the amount of high LTV deals that are issued. When house prices crashed in the 1990s, banks were faced with huge losses after being forced to sell repossessed homes as borrowers were unable to keep up with their mortgage repayments. More stringent affordability tests mean that lenders are less concerned about a repeat of that crisis, but the possibility of banks having to pay compensation remains if borrowers fall into negative equity and accuse them of impetuous lending. For example, banks had to pay out over £54 billion in compensation for the PPI mis-selling scandal. 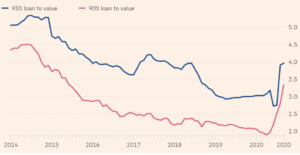 Whilst many lenders built an economic downturn into their forecasts and contingency plans, the large contraction in the UK’s economic output resulting from the pandemic was not predicted. It is unlikely that there will be an increase in high LTV deals in the near future as unemployment continues to increase, customers seek payment holidays and staff are overworked. The chair of the Intermediary Mortgage Lenders Association, Louisa Sedgwick, believes that 90% LTV lending is likely to come back but in a more focused way meaning that particular groups of borrowers with a reliable income streams will be targeted, rather than applications being left open to all.

Low-deposit mortgages are likely to make a comeback, but they are unlikely to be universally available before mid-2022, when the full effects of COVID-19 have passed. There are many economic factors that lenders consider, and only once all of these factors are meet will lenders resume offering high LTV deals to customers. For now, however, only those with the highest credit ratings will benefit from these deals, whilst the average homebuyer will need to either borrow less or put down a larger deposit. This means that for many, the dream of home ownership remains even further out of reach than before the pandemic, and hence Boris Johnson’s ‘revolution’ may not take place until further into the future.