5G ROLLOUT AND THE OPPORTUNITIES IT BRINGS

January 24, 2021 / Comments Off on 5G ROLLOUT AND THE OPPORTUNITIES IT BRINGS / News, Telecommunications, Media & Technology

With the rollout of 5G wireless networks on the way, it is worth identifying the potential winners across various subsectors in the context of one of the key technological advancements of the recent past. Given the direct relationship between risk and return, whenever there is significant upside potential, the risks will follow accordingly. This report will seek to address both.

As 5G entails faster data speeds, low latency communications and higher data caps for mobile devices, wireless service providers are the natural first pick for investors seeking exposure to 5G. In the markets where it has debuted, such as South Korea or China, the technology has had promising initial reception. According to Seyon Park, an analyst at Morgan Stanley, 5G services made up 15% and 10% handset base of the respective countries (as of August 2020), greater than initial estimates for 5G handset take-up. By offering 5G services, operators profit off the premium pricing and also seem to be capitalising on the prudent investments involving building upon the already existing 4G infrastructure rather than developing it from the scratch. T-Mobile US, Verizon Communications, and AT&T have been the most active players in deploying a 5G network in the US.

Ongoing wireless 5G networks development would also most likely boost revenues of the infrastructure, hardware and mobile devices providers, as shown by Figure 1. The top infrastructure players, i.e. proprietors of the telecom towers, such as American Tower Corp. and Crown Castle International Corp., have either been in talks with or have already secured lucrative master lease agreements with the largest wireless service providers. The stock of Telefon AB L.M. Ericsson, leading network equipment and software supplier, skyrocketed by 35% in 2020 alone. Apple premiered its 5G-enabled iPhone 12 on 13 October 2020 (+4.6% to date). Around 40% of their smartphone consumer base have not upgraded their iPhones in nearly three and a half years, according to Dan Ives, an analyst at Wedbush Securities, which could mean a potential boost in sales as the structural shift towards 5G-enabled devices becomes reality. 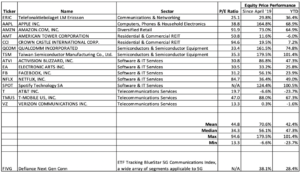 Figure 1: Summary of the price performance of the equities featured in the article. Prepared based on data from Yahoo Finance.

Stocks of semiconductor suppliers are also being consistently identified as one of the best exposures to the 5G boom. Businesses, such as Qualcomm or Taiwan Semiconductor, should easily capitalise on their superior radio frequency chip offerings, imperative to address the higher technological needs of 5G and increasingly in demand by the largest mobile device providers.

Moreover, internet companies, although less directly, might also benefit from the 5G rollout. The improved speed of their services could boost the demand for internet services as a whole, and analysts at RBC Capital and UBS name businesses related to streaming services, such as Netflix or Spotify, cloud-based solutions like Amazon or Facebook, or gaming companies like EA or Activision Blizzard, among top potential gainers.

Lastly, even though the 5G technology’s take-up exceeded expectations, the availability of dedicated apps still seems to be lagging behind. With the abundance of opportunities the new technology has to offer, it seems that it is only a matter of time until software development houses begin leveraging their competencies to deliver game-changing 5G-dependent killer apps. 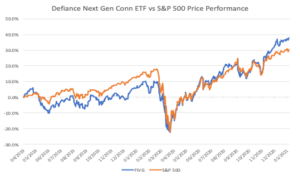 On the flip side, whenever investing in new technology, one needs to be aware of the associated risks it carries. It could be, for example, that the technology is not adopted on the expected scale, however the opposite could also pose a real threat. When too many players enter the market, each of them will try to claim their share, making the competition fierce and potentially limiting the profits of individual firms. Hence, individual stock pickers need to remain mindful that their picks might not pay off as much as anticipated. As such, the risk-adjusted returns might not be as appealing as they seem initially. Moreover, as with anything that is new and has a lot of uncertainty around it, it is important to remember that invested capital might be tied up for some time before it pays off. If, for example, the deployment of the 5G infrastructure is delayed, one needs to be ready to hold on to their position for a while, and most likely bear some downward price pressure in the meantime. Thus, 5G investing might not be an ideal opportunity for short-term profit seekers.

In conclusion, accelerated data transmission introduced by 5G facilitates not only better access to online data, but also presents opportunities in areas like household appliances or health monitors due to its’ speed advantages over 4G- reportedly up to a 100% improvement. However, any potential investments will not come without risk. Bearing in mind that the rollout-related initial costs are substantial and the increased battery drain on the devices might discourage many users, chances are that the returns realised on potential 5G investments will be limited.