When Shinzo Abe assumed office in December 2012, Japan’s economy was still suffering from the bursting of the Japanese asset price bubble in 1991. Since then, the country has experienced years of intermittent deflation, minimal growth and increasing debt in what became known as ‘Japan’s Lost Decade’. Japan’s gross domestic product (GDP) grew only 1.14% per annum between 1991-2003, while wages fell 5% and the country suffered a near-stagnant general price level. An ageing population also began to strain the nation’s economy, shrinking the labour force. To solve these problems, Abe launched Abenomics, a signature set of economic policy reforms based on the ‘three arrows’ of fiscal stimulus, monetary easing, and structural reforms. It is worth assessing how successful the 8 years of Abenomics have been in boosting the Japanese economy.

Large rounds of fiscal stimulus – including 10.3 trillion JPY in 2013, a further 5.5 trillion JPY in 2014 and in 2019 a package worth 26 trillion JPY – have attempted to boost domestic business sentiment and consumer demand. As a result, Japan’s GDP reached 540 trillion JPY in October 2019, up 8.6% from 2012 levels. The packages have caused consistent weakening of the yen, which has boosted the economy by increasing export demand through making products cheaper for overseas buyers, bringing up corporate profits and wages. Under Abe’s policies, 4 million jobs were created, and unemployment is at a record low of 2.2%.

In addition, markets have benefitted significantly from Abenomics. During Abe’s tenure, the Tokyo Stock Price (TOPIX) index returned 85%, significantly outperforming both the Morgan Stanley Capital International (MSCI) Europe and (MSCI) Emerging Market indices. The dividends of Japanese companies have doubled, and buybacks have quadrupled to a record 22 trillion JPY. Abe has also been successful internationally, securing the Japan-EU trade pact, and persuading international partners to stay in the Trans-Pacific Partnership after Trump pulled out of it.

In terms of structural reforms, Abe reduced the inherent bureaucracy in Japanese politics through a centralisation of power, and he passed market-friendly governance reforms which gave shareholder activists more power. Abe also softened long held nationalist views on immigration by issuing visas to unskilled workers in a new Guest Worker Program. Moreover, his policy of ‘Womenomics’ has steadily brought up the female employment rate from 68% in 2012 to 77% today. In these ways, Abenomics has fostered progress through all of the ‘three arrows’. 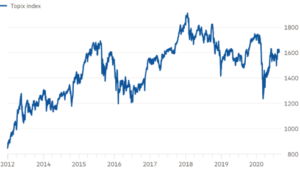 The key aim of Abenomics was increasing inflation. However, years of fiscal stimulus and loose monetary policy did not achieved Abe’s desired 2% inflation rate. After peaking at 1.4% in 2014, it is now back at 0.3%. Even before the COVID-19 pandemic, the Japanese economy was struggling with a large budget deficit, with public debt standing at 240% of output. While attempting to reduce this debt, Abe was widely criticised both times he increased the consumption tax. He first increased the tax from 5% to 8% in 2015, causing a 5% downturn in consumption and a recession. Twice delayed, the tax increased further to 10% in 2019, leading to another recession as the economy contracted 6.3% in Q4 of 2019, again due to a sharp decrease in spending. These tax increases, labelled as ‘destructive austerity policies’ by American economist Paul Krugman, therefore cancelled out some of the stimulatory effects of the bond-buying programme, damaging the momentum of Abenomics. The success of Abe’s ‘third arrow’ of structural reforms is thus widely regarded as insufficient. In addition, stimulus was slow to arrive due to Diet bureaucracy, with planned packages not arriving in time to make an impact.

There have also been no drastic reforms to the labour market, with Japanese women still facing widespread discrimination especially in higher-paying jobs. Only 13% of managers are women and the wage gap remains the largest among Organisation for Economic Co-operation and Development (OECD) nations at 25%. Moreover, Japan’s ageing population still constitutes a crisis, with more than 20% of the population aged 65 and over, the highest proportion in the world. The International Monetary Fund (IMF) calculated that the impact of an ageing population could drag down Japan’s average annual GDP growth by 1% over the next three decades. Therefore, it seems clear that Abenomics has failed to achieve cornerstone targets both in inflation and structural reforms.

Abenomics has yielded mixed results with regards to its targets. Decades of quantitative easing and ‘Buy My Abenomics’ rhetoric have spurred huge investment, including 25 trillion JPY between 2012-2015, and have led the Nikkei index to hit a 27-year high in 2018, closing at 24,120 points. National GDP and employment metrics have both steadily increased, and landmark trade deals and a weak yen boosted the economy through export earnings. However, inflation growth was never fully achieved, and structural reforms failed to solve governance problems of bureaucracy and discrimination, while Japan’s ageing population is becoming increasingly unsustainable. Nevertheless, regardless of Abe’s initial targets, Japan’s economy is in a better position today than it was in 2012. It thus seems that Abenomics has had a net positive effect. GDP growth may not be as high as international benchmarks and 2% inflation is yet to be reached, but Japan no longer has a stagnated economy suffering decades of intermittent deflation. Despite Abe stepping down, Abe’s Liberal Democratic party continues to be in favour of huge purchases of government bonds and exchange-traded funds, on top of ultra-low interest rates. It is now the era of Abenomics 2.0, and investors and economists have every right to be optimistic about Japan.