Tech titan Amazon recently announced (June 26, 2020) that it had agreed to acquire autonomous vehicle developer Zoox for an estimated 1.2 – 1.3 billion USD. Whilst this represents Amazon’s first acquisition in the industry, the E-commerce firm is not unfamiliar with the sector. Amazon has invested in a variety of autonomous vehicle companies such as Rivian and Aurora Innovation. This transaction would reportedly be Amazon’s second largest acquisition since its purchase of online shoe retailer Zappos in 2009. Referring to CB Insights’ infographic display in Figure 1, Amazon’s biggest deal was the 13.7 billion USD purchase of Whole Foods in 2017. 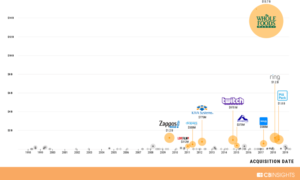 Figure 1: all of Amazon’s acquisitions since inception. CB Insights.

Jeff Bezos’ Amazon.com needs little in the way of introduction: it is a multinational tech giant focusing on e-commerce, cloud computing, digital streaming, and artificial intelligence. Amazon is considered one of the Big Four technology companies (along with Apple, Facebook and Alphabet) and is the largest online marketplace, AI assistant provider and cloud computing platform.

Founded in 2014, Zoox, the subject of the acquisition, is transforming Mobility-as-a-Service (MaaS) through the development of fully autonomous, purpose-built vehicles or “robo-taxis”. Unlike other competitors in the space, Zoox’s strategy does not rely on integrating autonomous driving capabilities with existing vehicles but instead focuses on developing a purpose-built car without a steering wheel that can move in any direction. While Zoox remains behind Cruise and Waymo with regards to the number of testing miles on the road, its rate of improvement has been “notable” according to Citi’s research analysts.

There is a convincing rationale behind the deal, which seemingly serves a diverse range of mutual benefits to both parties. Firstly, the autonomous vehicle industry has unparalleled growth prospects and market conditions. The sector is expected to be worth 126.8 billion USD by 2027 at a mammoth compound annual growth rate of 39.6%. Even in spite of the wide-spread disruption amid the pandemic, autonomous driving has attracted a record 3 billion USD in investments in Q1 of this year. Furthermore, Zoox’s technology aligns with Amazon’s long-term push into robotics, adding to their fleet that already consists of drones, warehouse robots and mini delivery robots. Analysts from Morgan Stanley quantified that the potential for Amazon to develop a “more efficient long-term delivery network” through leveraging Zoox’s technology could save 20 billion USD a year (achievable through distribution network automation). This is in line with their aim to lower shipping costs to as close to 0 USD as possible. Similarly, Amazon can help bring Zoox’s vision of autonomous ride-hailing to reality by leveraging its strong tech capabilities and financial resources. Jeff Wilke, Amazon’s consumer business Chief Executive summarises this alignment: “Like Amazon, Zoox is passionate about innovation and about its customers, and we’re excited to help the talented Zoox team to bring their vision to reality in the years ahead.”

One albeit improbable idea on the rationale is that Amazon might develop its own autonomous ride-hailing fleet that could pivot against Alphabet’s Waymo, GM’s Cruise and even Uber, at a time when some of these ride-sharing companies are scaling back on autonomous vehicle progression amid the pandemic. Just last year Amazon also invested in another self-driving startup, Aurora, and the electric pickup maker Rivian, pledging to acquire 100,000 delivery vans designed in partnership with Amazon. As such, the idea becomes more convincing.

Interestingly, Zoox’s estimated purchase price of 1.2 billion USD came in at a hefty discount to the 3.2 billion USD valuation it received in a Series B funding round just 2 years prior (2018). While this could allude to an extremely lucrative deal for Amazon, the company must be cautious of the reasoning behind this. According to Reuters, the deal arrived just in time as Zoox was set to run out of cash by the end of the month. Zoox was using more than 30 million USD a month, which Amazon reportedly had the option to lend once the deal had been signed. Further, Zoox has had a challenging few years due to problems with top executives (co-founder Tim Kentley-Klay was suddenly fired in 2018), a legal battle with Tesla over alleged stealing of proprietary information and trade secrets, and finally, general delays in bringing fully autonomous driving tech to market, partly due to the impact of Covid-19. Following this, Zoox cut 10% of its workforce (about 100 jobs) in April, just a week after letting go 120 contract workers.

Finally, long-term rationale realisation will be heavily impacted by the fierce competition in the space, as companies race to achieve their visions for autonomous vehicles and bring their solutions to market first.  Within this, the sector has seen numerous consolidations and acquisitions over the years, from big names such as Volkswagen, Ford, GM and Uber. However, similar to Zoox, many of the other start-ups that have been acquired (including Waymo, Cruise and Argo AI) all face substantial challenges and delays in launching due to the pandemic disruptions. On a lighter note, while the short-term implications of this acquisition are limited, Amazon’s deep pockets have the potential to simultaneously accelerate Zoox’s vision and provide substantial long-term returns through cost savings across their distribution network as a result of operational efficiencies.

Does Nuclear-Power Generation still have a Role to Play in the Future of Clean Energy?

IOSCO commits to a Global Sustainability Standards Board

The Story of Greensill Capital’s Collapse

What is causing the disparities in UK house prices indices?