On the 13th of December AstraZeneca announced the acquisition of rare disease specialist Alexion. The deal, worth 15 billion USD, capped a busy year for AstraZeneca during which the development of its vaccine with Oxford University had temporarily made it the most valuable FTSE 100 company. After the deal, Alexion’s shareholders now own 15 percent of the combined company after receiving 60 USD in cash and 2.2143 new AstraZeneca American Depositary Shares (ADSs) (an equity share of a non-US company that is available for purchase by US investors) per Alexion share. This represented a total value of 175 USD for Alexion shareholders, a 45 percent premium on the 12th December share price, and 14.5 times projected 2020 earnings. Ostensibly this represents relatively good value for AstraZeneca’s shareholders. Pharmaceutical premiums are traditionally large with high revenue drugs becoming increasingly scarce. Recently, on average, acquirers have paid 120 percent above where the target biotech or pharmaceutical shares have traded over the previous 30 days, the largest average premium in at least two decades (fig. 1). This raises the question as to why shareholders’ have had a negative reaction to this transaction. In the week following the deal announcement AstraZeneca’s shares dropped as much as 11.48 percent. 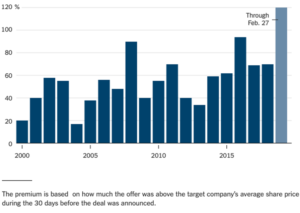 AstraZeneca has argued that it bought Alexion in order to diversify its revenue streams. AstraZeneca’s revenue over recent years has become reliant on cancer drugs. Acquiring Alexion will allow AstraZeneca to gain a foothold in the market for drugs that treat rare diseases. This is good news for two reasons. Firstly, rare disease drugs typically cost consumers a lot of money and have high-profit margins. For example, Alexion’s Soliris – a drug used to treat a rare blood disorder – costs a patient roughly 600,000 USD a year. Secondly, as there is limited competition in these highly specialised markets, the marketing costs are low. The acquisition also brings the company closer to CEO Pascal Soriot’s aggressive 2014 promise of 40bn USD in revenues by 2023 made in the heat of the Pfizer takeover bid – the current revenue is 20bn USD annually. The deal will increase revenue by 6bn USD while synergies will enable cost-cutting to the tune of 500m USD a year by 2024. This gives AstraZeneca a bigger base from which to invest in Research and Development and pay dividends to shareholders. AstraZeneca hoped that shareholders would echo these arguments. From the sell-off that preceded the deal’s announcement, it is clear that they have not.

Instead, some investors are arguing that the reason AstraZeneca had to buy someone, and the reason they bought Alexion was out of desperation. The need to hit the aforementioned ambitious earnings target and fortify cash flow was considered by many as the driving force behind the deal. As Naresh Chouhan, an analyst at Intron health, succinctly put it; ‘We believe there is no strategic rationale other than to buy near-term earnings and cash-flow’. While the near term prospects are positive, Alexion had 2bn USD in free cash flow in 2019, the acquisition opens AstraZeneca up to some longer-term issues. Moving beyond the argument that there might be better ways of accessing the rare disease market than giving 13bn USD to Alexion shareholders; there are concerns about the future of the combined company. Three of AstraZeneca’s blockbuster (drugs generating at least 1bn USD in revenue annually) drugs will lose patent protection from 2024 onwards (Farxiga, Brilinta, and Lynparza). Soliris too will begin facing competition in the same year. If these drugs are not replaced, then revenue could fall significantly. There is also a concern that Soriot, now 61 years old, will have vested his options and retired leaving the company without a unifying vision.

Whether Soriot stays or goes AstraZeneca’s acquisition of Alexion has certainly diversified its pipeline and its revenue stream beyond oncology. However, worries about patent expiration and whether the increased revenue will be enough to finance successful Research and Development projects, as well as an underlying sense of desperation about the purchase, will cause big questions for the combined company in years to come. Many investors are not sticking around to find out if it will be a success.