Boeing vs Airbus – Is the Trade Dispute Finally Coming to an End?

November 23, 2020 / Comments Off on Boeing vs Airbus – Is the Trade Dispute Finally Coming to an End? / Industrials, Automobile & Aerospace, News

For 16 years, Boeing (HQ in the USA) and Airbus (HQ in France) have been consistently claiming that the other firm has received illegal state aid from their respective government (Figure 1). However, a recent announcement by the WTO permitting the EU to impose retaliatory punitive tariffs against the US could potentially force both sides to agree a truce and end the long running dispute. 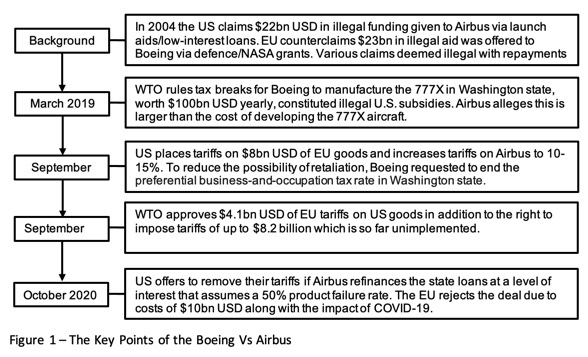 Despite the rejection of the US offer to withdraw tariffs, senior EU officials and Guillaume Faury (Airbus CEO) have stated that they are prepared to support a deal and end the costly, public and distracting legal battles. Boeing is especially keen to agree a deal as the approved tariffs target US Aerospace and Defence exports to Europe – an industry worth $30.5bn USD that could be affected by tariffs driving costs higher. Boeing’s military unit made a profit of $625m USD in Q3 whilst commercial losses exceeded $1.4bn USD. Boeing’s commercial division was impacted further by the grounding of the 737 Max fleet and the consequential cancellation of orders which cost the US company $18bn USD whilst the COVID-19 crisis has also caused Boeing to spend over $4.8bn USD this quarter. These expenses were not anticipated and the firm cannot afford to have its successful military division impacted.

Both firm’s also make substantial contributions to the economy with the two companies employing 300,000 people globally with many more in the company’s supply chains. For example, Airbus’s supply chain supports 275,000 American jobs in 40 states, whilst Boeing also relies on the UK to produce the 787 Dreamliner’s horizontal stabiliser, engines and landing gear. If US and EU officials are able to negotiate a truce that benefits both companies, further growth could occur and create more jobs globally.

A truce would also result in the removal of the punitive tariffs which the US and EU officials imposed on the other’s exports in an attempt to discourage further preferential treatment of Airbus or Boeing. These tariffs increased prices for a wide range of goods and their removal would benefit consumer’s wallets. In the past, effective competition between Boeing and Airbus encouraged innovation and created fuel efficient, quieter and faster aircraft. Ending the distracting legal battles, estimated to have cost the two firms $100m USD (Reuters), would once again allow the companies to focus on their products and improve the travelling experience for customers at a reduced cost.

Producing better aircraft would also ensure that the firm’s duopoly is unaffected by the threat from China’s state-owned and state-subsidised manufacturer, COMAC. Currently, both companies adopt a neutral stance towards the challenger for fear of losing out on sales to China’s domestic airlines. However, with over 80% of the world’s population never having flown and over 100 million Asians flying for the first time yearly, the Asian market and the competition within both have potential for rapid growth that Boeing and Airbus will want to be well positioned for – something that will be aided by ending this dispute.

It appears as though Boeing, Airbus and the EU/US officials are strongly incentivised to begin negotiations and end the long running transatlantic dispute – a stance that benefits consumers and encourages further success of the duopoly.