Embedded within the country’s meteoric rise towards the very top of the global superpower hemisphere, China’s automobile industry has proceeded to show resilience in the face of some of the most deteriorating economic contractions. Indubitably, this includes that of the COVID-19 pandemic crisis which has ultimately resulted in unprecedented financial ramifications caused by the disruption of key manufacturing and industrial processes. Despite this, it is this same resolute industry which is now adapting to the significance of ESG integrative policies which are increasingly dictating investor sentiment.

Simply put, the migration towards an electrified energy horizon is littered with remnants of Panglossian plans; China among many other countries, including those associated with the EU and the UK, have declared their ambitious commitments to achieve net-zero by 2060. Despite sharing similar plans as many other regions, China has displayed further promise in converting these pledges into vital action. Structural shifts, such as targeted subsidy schemes, have since fuelled innovation targeting sustainable growth. This has been prevalent within the automobile field as investors’ valuations of Chinese EV start-ups, Nio (US$35.4bn), Li Auto (US$15.9bn) and XPeng (US$14.4bn) are indicative of the country’s growing dominance as a more affordable alternative to US EV behemoth, Tesla, Inc. 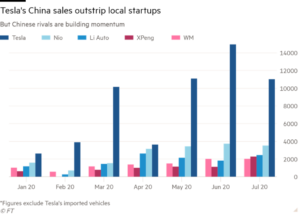 It is indeed, however, Elon Musk’s company which has also played a large role in encouraging the large-scale centralisation of China’s EV supply chain. The company’s investment in the US$2bn Gigafactory near Shanghai has simultaneously increased share prices associated with local Chinese manufacturers and this is demonstrated by the surge in earnings per share price and PE ratio (81) of Suzhou Inovance Automotive. Tesla’s ability to reduce raw material expenses has also been largely attributed to its decision to increase its products’ composition of locally produced parts by approximately 20. It is no surprise, therefore, that there has been recent speculation that this percentage may rise in the future as Tesla, Inc. looks to outcompete models such as Xpeng’s P7 Sedan, which are more modestly priced and are, hence, more accessible to the wider market. Also fuelling its propensity to compete with Western automakers is China’s unrivalled ability to account for 80% of the world’s total production of battery-grade raw materials. This is further cemented by the fact that China will be host to 75% of the lithium-ion battery plants scheduled to be assembled or are under construction up to 2029 – a vital component utilised to form electric automobiles.

Equally, increasing component defection to electrified solutions have acted as a catalyst in China’s procession towards capturing a larger share of the rare earths supply chain; extraction of such resource leads to the production of many renewables, including electric or hybrid vehicles, wind turbines and consumer electronics among others. The country has proceeded to tighten its grip on the swath of materials as they recognise its potency in mobilising a plethora of emerging industries. Despite consumer discretionary having struggled during the pandemic, it is recognised that the scarcity of rare earth resources will become an even more valued asset when mass-market scale is eventually reached.

Nonetheless, it is not just the realisation of market capitalisation that has incited the nation to exert more control on these minerals. The intensification of the US-China trade war has provided the nation with strategic supremacy and, most significantly, leverage in an industry which supports approximately 10 million jobs in the US and accounts for 3.5% of the country’s gross domestic product.

Regardless of the volatility facing equities across a range of geographies, China’s dominant production of electric automobiles alongside their array of vital renewable energy components highlight the country’s positive prospects in an increasingly ESG-conscious world.