November 13, 2020 / Comments Off on Doubts over the potency of Quantitative Easing as Bank of England announces new bond buying program / News

During its policy meeting on Thursday, the Bank of England (BoE) announced a raise of its bond purchase target by 150 billion GBP while keeping its official rate at 0.1% to support the economy through a second nationwide lockdown. Markets had been braced for this policy as analysts had expected the Monetary Policy Committee to raise quantitative easing (QE) by 100 billion GBP, on top of the 300 billion GBP announced so far this year.

The rationale for expanding the BoE’s bond-buying programme is to bolster the UK economy facing the negative economic impact of a resurgence of COVID-19. The BoE forecasted a 2% decline in the economy for the last three months of the year 2021 due to the new government restrictions. ‘The outlook for the economy remains unusually uncertain,’ said the institution. ‘It depends on the evolution of the pandemic and public health measures, as well as the nature of and transition to new trade agreements between the European Union and the UK.’ Taking into account the second lockdown, the central bank predicts that the UK economy will be 11% smaller by the end of 2020 than it was in late 2019.

However, the BoE also faces new doubts over the potency of buying bonds as investors question whether further Quantitative Easing will be effective in stimulating the UK economy. Looking ahead to next year, some analysts and investors argue that the effectiveness of additional government debt purchases is diminishing, or even that the BoE will eventually run out of bonds to buy. That in turn makes the BoE more likely to take the controversial step of cutting interest rates below zero as they seek new ways to stimulate a flagging economy. ‘The Bank of England is running out of room with QE,’ said Daniela Russell, head of UK rates strategy at HSBC. ‘They are likely to start looking for a better way to get more bang for their buck.’ Following its latest rounds of asset purchases, the BoE now owns 44% of outstanding government bonds, roughly double the proportion of the Federal Reserve’s ownership of US Treasuries. Figure 1 shows how the BoE gilt holdings have surged during the COVID-19 crisis from 380 billion GBP to 570 billion GBP. 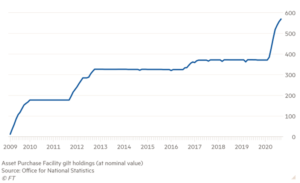 The central bank is allowed to increase its ownership of outstanding government bonds to a maximum of 70%, however, policymakers are likely to become uncomfortable before hitting that level because QE loses its potency when approaching that ownership limit. Therefore, there is reasonable concern that QE is less potent now than in March.

If Quantitative Easing is less potent this time, a further reduction in interest rates from the current record low of 0.1% becomes more likely. Therefore, markets are currently expecting a decline in interest rates to roughly minus 0.05% by the middle of next year (see Figure 2). 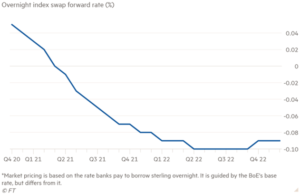 In conclusion, investors’ doubts over the potency of an increase in bond buying seem justified. It is questionable how long the BoE can rely on bond-buying as its main tool for stimulating the economy.