Glencore poised to become the green-standard for natural resources

January 17, 2021 / Comments Off on Glencore poised to become the green-standard for natural resources / News

Glencore emerged back into the limelight in December 2020 after announcing that Gary Nagle will succeed long-time chief executive Ivan Glasenberg in early 2021. The imminent change is likely to trigger a board reshuffle as investors anticipate an intensification of Glencore’s commitments to decarbonisation in an attempt to establish itself as a global pioneer for sustainable commitments, ahead of rivals such as Rio Tinto and Broken Hill Proprietary Company Limited (BHP).

The announcement comes after the company’s share price rose 47.5% over the past month, outperforming the FTSE 100’s 13.8% return. After missing out on the bull market for iron ore and being forced to cancel 2.6 billion USD in dividend payments this summer, Glencore has enjoyed a steady tailwind from a surge in copper prices, which are up 24% this year. Regardless, the firm lags behind its 2011 floatation price, down 54.6% over the last decade, compared to the FTSE’s positive 12.5% as can be seen in figure 1.

Having been outperformed by its rivals in recent years, Glencore is looking to bolster its green credentials, signified by a recent alignment with the 2016 Paris Agreement, a commitment amongst 195 signatories to keep the increase in global average temperature to well below 2 degrees Celsius. Christopher LaFemina, an analyst at Jefferies, said ‘a coal demerger will eventually happen once Gary Nagle takes over as CEO and Glencore will then be the green wave miner’.

The natural resource company aims to contribute to the global effort through decarbonising its own footprint. Mining accounts for a large part of Glencore’s operations, with 150 mining and metallurgical sites globally. The company targets a 40% reduction of total emissions by 2035 with the ultimate goal being net zero total emissions by 2050. With robust ESG commitments in place, the powerhouse will hope to benefit from the green bull market.

Earlier this year, Glencore demonstrated their commitment to being the standard bearer for responsibly sourced commodities by striking a deal with Tesla. It is to supply the electric car company with up to 6,000 tonnes of cobalt per year. The natural resource, which is used in the manufacture of lithium-ion batteries, is ‘coming from mines that meet our social and environmental standards’ according to Tesla. Despite this the disposal of lithium-ion batteries still damage the environment. The agreement likely came as a relief to Glencore, who have experienced a dramatic decrease in the price of cobalt over the past three years, as shown in figure 2. 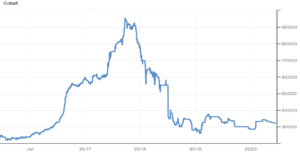 Following the Tesla deal, Glencore supported the launch of the Fair Cobalt Alliance in the Democratic Republic of Congo (DRC). The pact, which focuses on supporting small-scale cobalt mining in Congo, aims to create a sustainability standard for mining companies. This pact is particularly significant as 60% of global cobalt supplies come from DRC and is the location for two cobalt mines owned by Glencore, illustrating the firm’s reliance on supplies from the country. The alliance should come as another boost to Glencore’s reputation within the industry, who believe the agreement will encourage carmakers to use cobalt mined in DRC.

In the near future, Glencore will look to contribute to its decarbonisation goals by deserting its plans to replace reserves from its coal business. In October, outgoing CEO, Mr Glasenberg, reiterated his preference for running down coal mines as opposed to selling them. In response to pressure from activists, Mr Glasenberg suggested that selling coal mines could potentially put them in possession of ‘other players who have no intention of reducing emissions’. The phasing out of coal use comes at a convenient time for the company, whose high-quality Columbian coal has recently struggled to find buyers in traditional European markets. Prices of thermal coal have dropped 58% since the start of 2019. With dwindling hope of a rebound for traditional energy, Glencore’s commitment to sustainably sourced commodities will likely be rewarded with a continuation of the company’s recent good fortunes.