Amazon has been one of the most innovative and disruptive companies of this century, with astonishing success in almost all areas of online retail. Originally a bookselling company, Amazon’s product portfolio is extensive and its new ambitious plan to expand into healthcare and the prescription drug market represents the largest and most prominent unchartered territory in its empire. This new venture could also potentially help Amazon gain new traction in customers amongst the older population.

Spending on US prescription medications is expanding to an astonishing 500 billion USD a year and is growing up to 7% annually, according to IQVIA, an American health information technology company. Moreover, the online pharmacy business alone is expected to grow at a compound annual rate of 14.26%. According to the Centers for Disease Control and Prevention, 60% of American adults have at least one chronic illness, demonstrating the vast potential of the US healthcare market, and thus potentially globally, and Amazon wants a share in its success.

Reports of Amazon looking towards the healthcare market was driven by the retailer’s decision to acquire PillPack, a US automated pharmacy company, for 760 million GBP (1 billion USD) back in 2018, outbidding its closest rival Walmart. PillPack holds a pharmaceutical licence in 50 states, providing a vital platform for Amazon. Therefore, the retail company will have no difficulty establishing in-store pharmacies to supplement PillPack’s online business. Now that Amazon has bought the company, all other pharmacy businesses are starting to feel threatened. 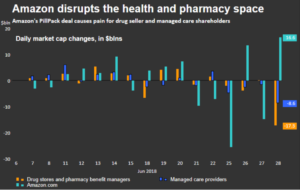 Shares in US pharmacy chains fell sharply on the 17th November after the announcement that Amazon was encroaching on their territory (Figure 1), with Walgreens, an American pharmacy and drug store chain, falling 9.6% and CVA Health, the largest pharmacy chain in America, falling 8.6% on Tuesday (Figure 2). Amazon, in contrast, gained about 5.5 billion USD in shares. The acquisition of PillPack is only a fragment of Amazon’s ambitious plan to displace the 3 trillion USD US healthcare industry and expand internationally, with applications in place for both the UK and India. The company is also working with J.P. Morgan Chase and Berkshire Hathaway on a joint scheme called ‘Haven’ with ambitions to improve healthcare and bring down their costs of production by simplifying the complex healthcare system and facilitating access to affordable treatments and prescription drugs, helping to reinforce its standing in the industry. 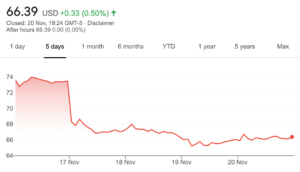 Figure 2: CVS Stock after the announcement of Amazon Pharmacy on November 17. Yahoo Finance

The accelerated shift to online retail during COVID-19 will also allow Amazon to significantly increase its services at a time where many consumers have valued and relied on the convenience of online businesses. Thus, Amazon’s expansion into pharmaceuticals is an astute move. As their customer base grows due to consumer’s increased need for online services, it’s wise for the retail giant to expand into areas that could provide more profit. The online commerce giant has the technology, drive, and framework to restructure the entire pharmaceutical supply chain. Amazon’s strategy is one to learn from.