Amid the global pandemic outbreak and ensuing lockdown restrictions, the vast majority of people have been forced to stay at home and transition a number of aspects of their lives online. A COVID-19-driven, steep increase in the demand for electronic goods translated to a global semiconductor supply shortage as chipmakers quickly reached capacity constraints. This report will investigate the course of events that led to the global semiconductor shortage across various industries, evaluating its implications and severity. Moreover, a number of firms and industries could be set to benefit, with the shortage creating potential investment opportunities.

Semiconductors are materials that intermediate electrical conductivity, such as silicon. In the form of microchips, they serve as integral elements of the vast majority of electronic devices. In the context of the current supply crunch, it is important to consider the stages involved in the semiconductor production process, illustrated by Figure 1. First, R&D, known as the Fabless stage of development, in which firms attempt to discover and perfect semiconductor design in order to be as efficient as possible. This is followed by the foundry, also known as the manufacturing stage, in which the newest designs are manufactured. Finally, rigorous testing in order to ensure the semiconductor’s functionality and safety. All in all, the typical production time of a semiconductor chip is 26 weeks- a sizeable length of time that partly explains the rigidity within the supply chains of the industry. 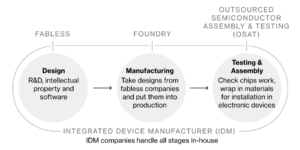 The current shortage stems predominately from a bottleneck that arose in the manufacturing (foundry) stage. With a lead time of up to 26 weeks, chip manufacturing is one of the most complex manufacturing processes according to Falan Yinug, director of industry statistics and economic policy at the Semiconductor Industry Association. Moreover, the foundry market is heavily concentrated. In Q4 2020, two players, Taiwan Semiconductor Manufacturing Company (TSMC) and Samsung, claimed 55.6% and 16.4% of market share respectively. Even though the chip shortage was first recognized at the turn of 2021, its outset can be traced back to August 2020 when the US Commerce Department announced sanctions against Chinese telecoms group Huawei and chip giant Semiconductor Manufacturing International Corp (SMIC). The two companies, along with others, were blacklisted over security concerns by the Trump administration. Following that, some clients redirected from SMIC to TSMC, adding to their already stretched production schedules. The lockdown-related soar in demand for laptops, gaming consoles and other electronics caught the foundry companies off guard, pushing their production capacity to the limit. Furthermore, as reported by Bloomberg, there was an excessive stockpiling of chips by some of the large customers in the semiconductor market, which was also pointed out by TSMC executives during their last earnings calls, further contributing to the supply shortage. In response to the shortage, and in order to ensure survival and withstand the ‘deadly blow’, as CNN described the US sanctions, Huawei reportedly accumulated large component inventories. Their competitors, such as Apple, responded similarly in an attempt to hedge out any potential supply risks stemming from that course of events.

Consequently, several industries are now suffering from the impacts of the chip famine, with the automotive industry among the most exposed. According to AutoForecast Solutions, provider of global automotive forecasting databases, the production of more than 280,000 vehicles has been put on hold thus far, and the number of affected vehicles could total up to 500,000 as reported by IHS Markit. This would translate to up to $61 billion in losses of sales across the industry, with virtually no carmaker escaping unharmed. Toyota Motor, Ford Motor, Fiat Chrysler all have halted their production lines for some period of time during the pandemic, and several more, including Volkswagen, disclosed that potential production issues might be inevitable. The below graphic breaks down carmakers’ projected sales loss by region. 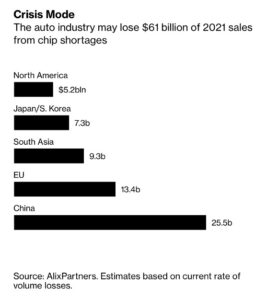 Figure 2. Graph showing by region how much the auto industry may lose of 2021 sales due to chip shortages. AlixPartners.

With an increasing dependence on electronics, and therefore microchips, present in the production of nearly every modern vehicle, the question of how carmakers, one of the most obvious groups to be affected, were left with such little supply arises. Richard Dixon, a senior principal analyst at IHS Markit, claims that the shortage dates back to the second quarter of 2020, when, in the aftermath of the first wave of COVID-19, automakers had to limit production. Much like for other discretionary products, the demand for cars tends to decrease during economic downturns as real incomes are depleted. Additionally, some of the plants had to be temporarily shut down due to restrictions. Consequently, carmakers waived the chip orders, and the chipmakers consequently shifted their attention to the booming consumer electronics markets like gaming consoles, TVs or laptops according to Dan Hearsch at the consulting firm AlixPartners. Falan Yinug believes that the automotive industry also failed to foresee that the demand for vehicles would recover so rapidly (illustrated by the below graph), which in turn led to the imbalance in the demand for chips. 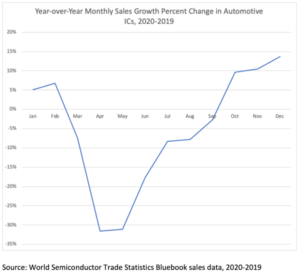 Nevertheless, the automotive industry is not the only one on which the chip shortage is projected to take a toll. According to Minebea Mitsumi Inc, a supplier to the transport and electronic industries, the chip crisis can also possibly affect airlines and aviation. Airlines have been in the process of scrapping old aircraft, amid global restrictions on air travel that have reduced passenger numbers back to levels as low as in 2003, according to the UN’s International Civil Aviation Organization. However, if the demand recovery for international travel follows a path similar to the demand for cars – an initial fall of 27% before a strong recovery meant that sales were down only 9% on 2019 – new planes would have to be acquired to replace those recently scrapped by airlines. Additionally, consumer electronics, which benefited from the chipmakers’ undivided attention when the world was locked down, must now adapt to the new circumstances. Game consoles manufacturers, such as Sony or Microsoft have been struggling to address the demand for their latest products, with Sony selling out all 4.5 million available units of the PS5 within 2 months of release, and there might be no end to that within sight.

According to IHS Markit, given the complexity of the production process, there is no immediate fix to the scarcity of chips in the short term. Capacity constraints cannot be easily addressed in the short term due to the sheer time involved in the building of semiconductor production premises and the semiconductors themselves and, hence, the crisis is expected to prolong until Q3 2021, at the earliest. In the automotive industry, where supply chains are complex, some players are likely to reshape their operations. The number of intermediaries involved in the process of securing chips varies between the carmakers. Some of them rely on their part makers (automotive suppliers) in that regard, and some negotiate directly with manufacturers. To hold more control over their operations, it is possible that going forward more players will shift towards the latter and aim to bypass the middleman. Such a move is already being considered by Volkswagen according to the Financial Times. It might be an alarming outcome for the automotive suppliers such as Continental, Robert Bosch or NXP Semiconductors who are set to lose a large part of their revenue- automotive sales made up 47% of NXP’s revenue in 2020. Additionally, in the attempt to avoid further bottlenecks, automakers plan on building semiconductor stockpiles in the future. Companies such as Mercedes-Benz, Porsche, or Volvo are reportedly considering an overhaul of their ‘just-in-time’ supply chains, which assumes little to no inventory holdings. The system has commonly been used in the industry for decades. A move towards a ‘just in case’ supply chain- the alternative to just-in-time, would involve automotive firms holding a surplus of semiconductors, in order to allow them to easier meet fluctuations in demand. However, firms would be unable to acquire the stockpiles needed to implement these systems until the supply of semiconductors returns to levels seen pre- COVID 19. 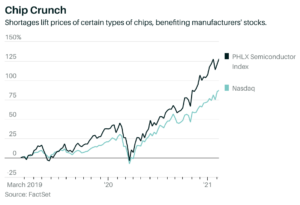 Figure 4. Graph illustrating the impact of the chip shortage on manufacturers’ stocks. FactSet.

In conclusion, the chips shortage is a great case study on how COVID-19 affected supply chains, and the ripple effect it had on businesses around the world. Some speculate that the current situation could lead to an increase in semiconductor equity prices, which in theory will further elevate in the short run as the supply-demand imbalance persists. In the long run, however, it seems that the microchip industry might see a drastic shift as the fabless companies rethink their outsourcing practices. It is possibly better to stay clear of the automotive-related investment, as the disrupted production will most likely take a toll on the earnings across the industry in the upcoming quarters. Finally, as the carmakers overhauling their supply chains remains a plausible scenario, potential investors also need to be mindful that such would most likely translate to increased capital expenditure, leading to lower free cash flows in the foreseeable future.