The consolidation saga continues. The digital payments market is currently witnessing a substantial surge in consolidations as firms race for scale, seeking to become more competitive and keep pace with the endless technological innovations. With 2 acquisitions in just 6 weeks, Nexi is no exception to this trend. One of these is the recent announcement (16 November 2020) that Italy’s largest payments group, Nexi, is in exclusive talks to acquire Nordic payments rival Nets in a 7.8 billion EUR all-share deal. This marks the latest example of European companies racing to consolidate in the fragmented digital payments sector to reduce the substantial fixed costs that arise from the need for continuous investment in technology. Even the pandemic has done little to cool the pace of acquisitions. As depicted below, almost 32 billion USD of transactions have been conducted in the European payments industry this year, up from 8.5 billion in the same period in 2019. 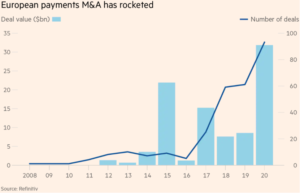 The subsequent subject of the acquisition, Nets, is an integrated pan-European PayTech player, with leadership positions in advanced digital payments markets, namely Nordics. Today, Nets operates through two business segments: Merchant Services and Issuer & eSecurity Services, covering the full digital payments value chain from payment capture and authorisation to processing, clearing and settlement. It is worth noting that in August 2019, Nets announced the disposal of its account-to-account payment business to Mastercard for 2.85 billion EUR. This deal, which is expected to close Q1 2021, likely appealed to Nexi as it was a division that historically grew below group average and reduced net debt to 1.8 billion EUR.

Regarding the deal itself, Nexi reportedly jumped at the opportunity to acquire Nets, which arose after US group Global Payments suddenly pulled out of the race due to risk concerns of making a cross-border acquisition amidst the second coronavirus wave. Nets also took advantage of the fact that rival Worldline was busy with its agreed acquisition of Ingenico. If successful, the combination of both Nets and the Milan-based payment provider SIA would turn Nexi into Europe’s leading payments operator, with a market cap of more than 22 billion EUR.

Having just combined with local rivals SIA, the motive behind its move on yet another target remains questionable. It is initially worth looking at this from an industry perspective. As aforementioned, the digital payments market is widely regarded as a scale game. With the need for continuous investment in tech creating substantial fixed costs coinciding with a spike in online transactions, the sector’s model has unleashed a scramble for scale. As such, the previously dormant sector has suddenly awakened and there has a been a global theme of M&A within the space to enable companies to efficiently and cost-effectively expand, and Nexi is seemingly one of the winners of this trend. Linked to this, Nexi was a relatively small Italian payments provider just a few years ago but has been growing significantly, and almost exclusively through M&A, to become one of Europe’s leading payments firm by transaction volume.

Taking a closer look at the rationale, there is also substantial value creation for shareholders as it is expected that the combination will facilitate the realisation of 170 million EUR total recurring cash synergies, emphasising the potential financial gain of combining the two companies. Breaking this down, 135 million EUR run-rate EBITDA synergies is expected, which includes 95 million EUR cost synergies and 40 million EUR revenue synergies. Revenue synergies are predominantly achievable through cross-selling of the group’s combined solutions, at both an international and regional scale. 35 million EUR capex synergies are also expected, achievable through scaling investments on innovation and product development, as well as investment optimization (avoiding duplication of investments).

Remarkably, the synergies don’t stop there. Nexi also mentioned that in addition to the aforementioned benefits an additional 150 million EUR recurring cash synergies is expected from the merger with SIA to create a group with annual synergies estimated at a combined 320 million EUR and pro-forma 2020 revenues of 2.9 billion EUR. Finally, the Nets acquisition offers Nexi enhanced growth potential and resiliency through geographic diversification and an enlarged revenue mix. As seen in Figure 2, this is expected to result in pro-forma EBITDA of 1.5 billion in 2020. 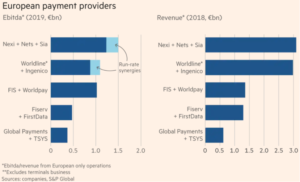 With Nexi stating that it expects to close the Nets and SIA deal in the second and third quarter of 2021, one key contingent to the success of the deal is Nexi’s ability to smoothly integrate the two acquisitions simultaneously. As reported by Refinitiv, analysts have emphasised that Nexi may face significant obstacles in tackling this challenge and going through two major transactions in such quick succession. Jefferies highlighted that an extended timeframe to integrate Nets helps to reduce execution risks for what was ‘shaping up to be one of the more complex deals undertaken in European payments’. Additionally, the high debt at Nexi may add to the difficulties in dealing with both transactions in the short-term. Once the SIA and Nets deals are complete, Nexi’s net debt to EBITDA will approach three times. This, in combination with the stagnant revenues in the Nordic regions where Nets predominantly operates, sets the scene for a tough road ahead.

One final risk is that both transactions are subject to antitrust approval. However, this is made less significant by Nexi’s CEO, Paolo Bertoluzzo mentioning that the groups had no major overlaps. Overall, the deal creates a more resilient Nexi with market and client diversification, scale and e-commerce exposure underlined as the key advantages.