October 28, 2020 / Comments Off on Orphan Diseases Require Care: The Rise of the Orphan Drug Market / News

An orphan drug is a pharmaceutical agent intended for the treatment, prevention or diagnosis of an ‘orphan disease’ – a serious condition that affects a very small minority of the population. Thus, the market for orphan drugs is niche, while the cost of research and development is similar to that of non-orphan drugs, resulting in producers charging an extremely high cost for treatment.

The Orphan Drug Act (ODA) passed by the US Congress in 1983 has significantly facilitated companies’ ability to develop orphan drugs in the US. It provides several incentives to companies that develop these drugs, including grants, fast-track approval of drugs for rare diseases and seven-year market exclusivity. The latter is especially attractive to pharmaceutical firms as the period is independent of the drug’s current patent status. If a competitor wishes to enter the market for the same drug, it must prove that its own drug is superior (in terms of efficiency, decreased side-effects etc.) to the present drug, creating an appealing monopolistic market. A similar legislation to the ODA in the EU in 2000 has also expanded the industry across Europe. Thanks to this, effect therapies have been developed to treat conditions such as cystic fibrosis and glioma.

These life-changing treatments come at a price, however. The mean cost per patient of the top 100 US orphan drugs was almost 4.5 times greater than the non-orphan cost in 2018, at 150,854 USD for orphan disease treatment compared to 33,654 USD for non-orphan. These elevated costs place stress on insurance companies as well as patients, which governments have responded to by providing subsidies and other forms of financial assistance. This has prompted debates about whether orphan drugs are really cost-effective. Health economists may argue that orphan drugs should not be judged differently from drugs for common diseases and should therefore demonstrate good value for money, which, in practice, would lead to orphan drugs being denied public subsidy. However, there are other characteristics of orphan drugs that may justify exempting it from standard criteria, such as the absence of alternative effective treatments. It remains to be determined whether the prices charged by orphan drug manufacturers are fair.

The orphan drug market is undoubtedly on the rise. Global orphan drug sales are predicted to grow at a CAGR of 12.3% to 242 billion USD between 2019 and 2024 (roughly double the rate predicted for the non-orphan drug market) and are forecast to make up 20.3% of worldwide prescription sales by 2024.  Orphan drugs represent an increasing proportion of newly approved therapies, nearing half of the total today (see Figure 1). 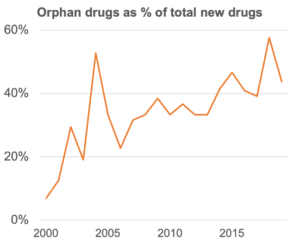 Figure 1: Graph showing the number of orphan drugs as a percentage of total new drugs. Source: Hortense Comon and FDA.

One of the major players in the Orphan Medicinal Product (OMP) industry is Ultragenyx Pharmaceutical, whose shares have surged 91.1% so far this year. It markets two drugs, Crysvita and Mepsevii, which are used to treat X-linked hypophosphatemia and Sly syndrome respectively. Ultragenyx saw continued strong demand for Crysvita. In North America, 80% of patients receive the drug at home, thereby reducing the impact of disruptions caused by COVID-19. Ultragenyx demonstrates the benefits that can be reaped from the OMP market, which does not follow the traditional model of a mass-produced commercial drug. Instead, it focuses on a niche target, but profits from other aspects such as reduced clinical trial expenses.

Pharmaceutical giants like GlaxoSmithKline and Pfizer have delved into the OMP market, often through the acquisition of smaller companies specialised in orphan drugs. Takeda, the largest pharmaceutical company in Asia, acquired Shire for 62 billion USD in early 2019 in one of the biggest pharmaceutical deals of the century. Shire was an Irish drug maker focusing on treating rare diseases and other specialised conditions, and gave Takeda a foothold in the US, a market which it had been trying to break into. The deal highlighted the value of OMPs and shed light on the pharma ecosystem. It proved that while highly focused biotech firms may excel at research and development, Big Pharma retains an advantage in lobbying, negotiation, and sales acumen that are required to take a new drug from the lab to the market. Several more M&A transactions involving orphan drug companies followed.

We can expect the orphan drug market to continue flourishing in the next few years, as many compete for the medical and commercial breakthroughs that unique, targeted therapies can bring about.