Pot luck? Marijuana may be the winner of the 2020 US elections

The election on Tuesday 3rd November saw a big win for drug legalisation in the US. Wherever a reform on marijuana or other drug policy was on the ballot, it was successful. Notably, Mississippi and South Dakota legalised medical marijuana, with there now being 15 US states in which the substance is legal. Washington DC and Oregon also became the first places to decriminalise a key ingredient found in magic mushrooms, leading the share price of biotech companies developing psychedelic drugs to soar. Shares in Compass Pathways, a psychedelic drug developer, jumped 9 percent to 35.94 USD the day after the election. It was the first psychedelic drug company to go public on a major stock exchange in September. Its IPO priced at 17 USD per share, putting the valuation at about 544 million USD. Although it is only a very new company, it is estimated to grow as its products promise strong results.

This year, there have been major advances in psychedelic medicine, with Johns Hopkins launching a 17 million USD research project to assess how psychedelics impact brain function and mood. It has shown that they can treat a broad range of mental issues such as OCD, PTSD and anxiety. This has become crucial as the Western hemisphere suffers a mental health crisis exacerbated by the repercussions of COVID-19 such as self-isolation, social distancing and job losses. Big pharmaceutical companies are expected to invest more into psychedelics as clinical trials begin to show more positive results. Indeed, Johnson & Johnson has already seen its drug Spravato, which uses a derivative of ketamine, approved by the FDA to treat depression. The psychedelic drugs industry has received significant attention from investors over the past year, but there are concerns about whether it will continue to be successful.

Nonetheless, further legalisation, and the associated rise in volumes do not necessary mean a profitable business, with the experience of the cannabis industry over the past five years telling a cautionary tale. The cannabis industry enjoyed a boom when marijuana was first legalised in several US states. Investors who took a chance on cannabis stocks in 2016 and 2017 saw shares increase in value by around 70% by early 2019. However, the industry suffered a severe downturn throughout the rest of the year (see Figure 1). 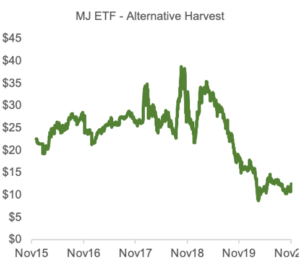 Aurora Cannabis, a major Canadian producer, currently trades for about 5 percent of its March 2019 price. With US sales of legal marijuana rising from 6 billion USD in 2016 to 14 billion USD in 2020, and expecting to reach 23 billion USD in 2025, investors may question the valuation of these stocks.

A key factor behind this devaluation can be attributed to the discrepancy behind the growth potential offered by legalisation policies and the real-world challenges. Legalisation fostered competition and price and quality discrimination by customers. While the price of illegal drugs is inflated by feeble production, frail supply chains, and price-insensitive customers, a liberalised market is open to new entrants and allows buyers to shop for the best price. Investors lured by high margins and soaring production in early years experienced the effect of high competition in a commoditised market.

The new drug policies brought into place by the election could change the fortunes of cannabis manufacturers and medical innovators. In addition to the legalisation of drugs at the state level, a Biden presidency could bring about legalisation on a federal level, encouraging larger companies to enter the market. However, legalisation, quality control and transparency will create a level playing field for manufacturers and distributors in which competition will drive profit margins down. Where quality, cost, and distribution make the difference, the largest pharmaceutical firms and retailers may prevail.