Prescription drug prices: US vs the world

March 8, 2021 / Comments Off on Prescription drug prices: US vs the world / Healthcare & Pharmaceuticals, News

Worldwide prescription drug spending has been on the rise for several decades, as new research discoveries have propelled the sale of life-changing medicines. However, the prices of prescription drugs are not equal among nations, with the US consistently ranking among the highest in the world (see Figure 1). For example, research in 2018 found that the average US manufacturer price of insulin was 98.70 USD per unit, compared to 12.00 USD in Canada and 7.52 USD in the UK. According to a recent report from the research organisation RAND Corporation, drug prices in the US are more than 250 per cent higher overall than those in 32 other OECD (Organization for Economic Cooperation and Development) nations. Investigators estimated that total drug spending was 795 billion USD across all the OECD nations studied. The US accounted for 58 per cent of sales but only 24 per cent of the volume. These elevated prices have been a significant topic of conversation in US politics and the recent presidential election. 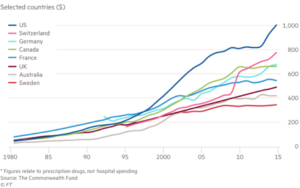 Figure 1. Prescription drug spending per capita in the US compared to other countries. FT.

The major reason for the high prices is that pharmaceutical companies have monopolies over the supply of many prescription drugs. In the period following the Second World War, the US saw a huge growth in its pharmaceutical industry, benefitting from the development of a wide range of drugs, from antibiotics to antihistamines. Most of these drugs were priced much more cheaply than today, largely thanks to government policies that allowed for a relatively open and efficient pharmaceutical market. By limiting the length of patent monopolies and forcing drug makers to license their patents when they reached a market share cap, they nurtured competition. Many of these policies are no longer in place, giving way to ever-increasing prices.

Currently, patents allow for market exclusivity for at most 20 years after patent approval. However, pharmaceutical companies often find loopholes and implement strategies to lengthen their monopoly period. They may obtain additional patents on other aspects of their drug – the method of administration, for example – or recategorize them as “orphan drugs” for rare diseases. The Orphan Drug Act grants special market exclusivity as compensation for drugs that are designed to treat a small number of patients, where total sales are not expected to be profitable. Drug makers can exploit this by applying for orphan drug status for their drugs so that they can take advantage of government benefits and subsidies. Manufacturers can also drive drug prices up without facing punishment from the government during their market exclusivity period, creating a natural monopoly.

Though many other countries in the world have adopted government-granted monopolies similar to the US, they apply price controls to keep costs in check. The US is one of the only countries that does not negotiate prices: thus, costs inevitably soar. Some of the worst occurrences of price hikes have been widely publicised, such as when the price of the drug Daraprim, which is used in the treatment of aids and cancer patients, was pushed up from 13.50 USD to 750 UD. But smaller frequent price rises from pharmaceutical companies continue to affect millions of US patients.

Drug companies believe that if the US adopted similar policies to other nations in order to curb the prices, they would be forced to cut their spending on research and development since the prices they set for a drug are necessary to fund research. But their profits are about twice as high as their spending on research and development, with a significant portion of profits going towards sales and marketing. Big pharma companies are also spending more money on M&A: they buy smaller biotechs at the early stages in their development and use their own sales resources to sell the drugs widely. One example of this was Gilead’s 4.9 billion USD acquisition of the biotech company Forty Seven last year, giving Gilead full rights to magrolimab, an antibody in clinical development for the treatment of several cancers. This added to Gilead’s expanding portfolio of companies specialising in cancer treatments and was followed by another cancer biotech acquisition in December 2020. The price of Gilead stocks has risen by around 10 per cent since December, with analysts predicting that the drugs it gained the rights to in these deals will provide a ‘significant commercial opportunity’.

Stock buyback is another area where pharma companies have been increasing their spending. According to a 2016-2019 analysis of the 12 largest US pharmaceutical companies by Axios, stock buybacks totalled 183 billion USD over the 4-year period – over 70 per cent of what they spent on research and development. One of the companies, Amgen, spent over twice as much on buying back shares as on research. Drug makers return value to their shareholders in this way, but this may come at the cost of funding research.

The Biden Administration may not provide the solutions to the prescription drug price problem. Trump was unable to achieve significant progress in reducing drug prices despite issuing multiple executive orders, and it seems unlikely that Biden will be successful on that front. However, efforts may be made to increase drug price transparency. The current lack of it in the drug supply chain system creates conditions that are favourable to limited competition and price maximisation. Though increased transparency is not a direct route towards lower prices, it could help. The Biden Administration may also wish to amend the existing law that bans Medicare from negotiating lower prices with drug manufacturers, although it remains to be seen whether this could be done in practice.

The US should perhaps look towards European countries to learn from their pharmaceutical systems, which have taken steps to introduce assessments of cost-effectiveness. Germany, for example, allows drug manufacturers to freely set prices for a limited period when bringing new drugs to market. It then uses the data available from that period to evaluate the benefit provided by the new drug, comparing it to existing alternatives. This serves as the foundation for price negotiations between manufacturers and health plans. Ultimately, analysis of the cost-benefit and cost-effectiveness of prescription drugs could hold the key to connecting the price of drugs to the value derived from them.