Reliance Industries: Does the Indian Conglomerate’s most recent foray into E-commerce make it a safe bet in a period of Global Market Volatility?

September 6, 2020 / Comments Off on Reliance Industries: Does the Indian Conglomerate’s most recent foray into E-commerce make it a safe bet in a period of Global Market Volatility? / News

Reliance Industries, India’s largest company with a market capitalisation of 195.76 billion USD, has long been a national treasure of the Indian economy. Yet it is its owner and chairman Mukesh Ambani’s transformation of the conglomerate from a heavy industrial group to a primarily consumer goods and telecommunications orientated group, positioned to profit from the rise of India’s middle class, that promises to add the most value for investors. Building on the successful 2016 launch of Jio Platforms – a digital services and telecommunications company – which has amassed 388 million users in four years, Ambani now plans to break into the Indian e-commerce market with the launch of JioMart in January 2020. The new platform will facilitate links between local shops – or kiranas – and consumers for grocery delivery, and wholesalers for new stock delivery.

This is a strategically astute move, according to global consultancy firm AT Kearney, since online grocery delivery is one of the fastest-growing components of India’s 60 billion USD e-commerce market, with annual sales growth rising to 87% in 2019. Groceries also account for 55% of all Indian retail sales. With grocery revenue prior to the launch of JioMart constituting 17.9% of Reliance Industries’ organised retail revenue (which represented just 7.1% of its total revenues in 2019), the group’s drive into the grocery delivery market is cause for optimism amongst investors. Reliance’s entry into the sector will also be assisted by advantageous regulations for Indian companies passed in 2019, which restrict the ability of foreign-owned companies to sell their own inventory, rather than third-party goods, thus curtailing a lucrative part of their business.

Even accounting for such protectionist regulation, however, the threat from foreign competitors, such as Walmart subsidiary Flipkart and Amazon, which have 31.9% and 31.2% market share respectively, remains significant. Jeff Bezos signalled his intent in what Satish Menna, a senior analyst at Forrester Research, called ‘a fight for the household’s spending’, with his announcement in January 2020 that Amazon would invest 1 billion USD to digitise small and medium business across India and target 10 billion USD of ‘Made in India’ exports by 2025. Yet it has been Reliance who have taken the biggest lead in the contest for India’s e-commerce market, with the announcement in August 2020 that the group is to pay 3.4 billion USD for India’s second largest retailer Future Group. The acquisition of Future Group’s retail assets and back-end infrastructure will give Reliance control of approximately one-third of India’s modern retail sector.

However, it is the recent inflows of capital from Silicon Valley and private equity companies that are most indicative of the strong future prospects for Reliance Industries. The most significant single investment has been that of Facebook, which invested 5.7 billion USD into Jio Platforms, leading to the integration of JioMart into Whatsapp, thereby accessing its 400 million users. Other noteworthy backers include Google, which purchased a 7.7% stake in Jio Platforms equalling 4.5 billion USD, Intel (253 million USD) and Qualcomm (97 million USD). All considered, Reliance’s three-month flurry of deals with 13 global investors has totalled 20 billion USD, or 33% of Jio Platforms, complemented by a 7 billion USD rights issue in June 2020. 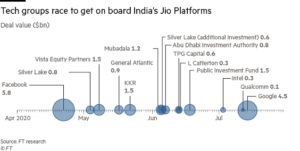 Figure 1: Graph showing the size of deals completed between Jio Platforms and investors over time. Sourced from FT Research.

The foremost consequence of the capital-raising exercise is that the net debt (total debt minus cash) of Reliance Industries is now zero, which represents one of the quickest and most impressive deleveraging drives of recent years. Prior to this year, Reliance Industries had been highly levered as Jio Platforms expanded rapidly. In fact, Reliance’s net debt to equity ratio increased tenfold between 2013 and 2019, according to Bernstein Research, which had prompted Credit Suisse to downgrade Reliance’s stock from a ‘neutral’ to ‘underperform’ rating in August 2019. However, with the business model now appearing to be much better capitalised, investors’ primary reservation may no longer apply.

The future prospects for Reliance Industries thus appear overwhelmingly positive. Certainly, with an IPO planned within the next five years, JioMart and the wider Jio Platforms network must deliver returns on the huge investments it has received. Yet as Jayanth Kolla, founder of Bangalore-based consultancy Convergence Catalyst, commented, ‘for its scale and size, [investing in Jio] is as stable as it gets in the current environment.’