Running out of charge: Investors turn away from QuantumScape

February 2, 2021 / Comments Off on Running out of charge: Investors turn away from QuantumScape / News

The development of solid-state lithium metal batteries has long been considered as the crucial element in bringing electric vehicles into the mainstream. Researchers have been attempting to improve the technology for years; perfecting the batteries could propel the electric vehicle market, helping to decarbonise the car industry. Therefore, when QuantumScape announced a breakthrough in the development of their batteries, shares tripled in the recently floated company. In late 2020, however, investor sentiment pivoted away from QuantumScape amid fears that they will ultimately be unable to deliver on their aim of producing solid-state lithium batteries at scale.

Co-Founded in 2010 by Jagdeep Singh and Professor Fritz Prinz of Stanford University, the start-up operated largely in secret until December 2020, when Mr. Singh announced the development of a ceramic material which enabled batteries to be charged at 80% capacity in 15 minutes. This followed a floatation the preceding month after QuantumScape said it would merge with Kensington Capital Acquisition Corp, a deal valuing the firm at 3.3 billion USD. The merger included the sale of 500 million USD in shares to investors such as Fidelity and Janus Henderson, marking the most prominent listing of a US battery company for 11 years.

According to Morningstar, QuantumScape is “engaged in the development of next generation lithium metal batteries for use in electric vehicles”. By 2028, the start-up is aiming to produce enough batteries for over 900,000 vehicles each year and is targeting 2024 as the date for the beginning of commercial production. The company was given a strong boost in 2012 when Volkswagen invested 300 million USD, as well as an undisclosed sum to help build a 1-gigawatt hour (GWh) pilot factory, production of which is set to begin later this year. If the factory is deemed a success, an agreement is in place to expand to a 20 GWh factory, bolstering Mr. Singh’s hopes of achieving his 2024 production targets.  While the agreement between QuantumScape and Volkswagen allowed the German automaker the rights to buy the first batteries produced, it did not grant them exclusive access to the innovative technology, allowing the start-up to sell to other OEMs (Original Equipment Manufacturer).

After the reported breakthrough, QuantumScape reached a lofty 50 billion USD valuation, peaking at 133 USD per share on December 24th. The 466% rise signalled a consensus among investors that the company’s technology is unrivalled in the crowded solid-state battery market. Stanley Whittingham, Nobel Prize winning chemist, said “I have not seen data this good anywhere else…I think it’s a real breakthrough”. Regardless, the valuation began a steep drop-off in the final days of 2020.

Following initial enthusiasm, scepticism over QuantumScape’s ability to commercialise their solid-state batteries, as well as the strong competition, has caused investors to pivot away from the stock. This led to a 44% decline in share price, as shown in Figure 1, hitting 50 USD per share on January 4th. Currently, research has only been conducted on batteries smaller than those found in an Apple Watch, and they have never been tested outside of the lab. Making a product at scale is a “million miles away from doing it in the lab” according to Billy Wu, a battery expert at Imperial College London. 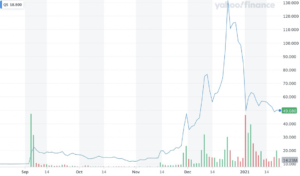 Investors will also be wary of the lack of revenue stream at QuantumScape. As of 2021, the company has generated no revenue, reporting a net loss of 51 million USD in 2019. Despite Mr Singh’s projections that revenue will soar to 3 billion USD by 2026, QuantumScape will need to show evidence of profitability if they are to feasibly compete with established competitors such as Nio, Toyota and Samsung.