In what is expected to be the biggest all-stock deal of 2020, S&P Global has entered into an agreement to merge with London-based IHS Markit to create a data goliath. At the same time, M&A activity reached a record high in Q3 with more than 1 trillion USD worth of transactions, mostly focused on coronavirus-resilient sectors such as healthcare and tech, according to Refinitiv data. As for why this is the case, dealmakers have become increasingly comfortable with large transactions in recent months, encouraged by positive vaccine news and the end of the US election.

The S&P Global-IHS Markit deal, valued at 44 billion USD, marks the latest round of consolidation among the finance industry’s largest data providers. In August, New York Stock Exchange owner, Intercontinental Exchange (ICE), struck its largest deal ever after it agreed to acquire Ellie Mae, a US mortgage data provider, for 11 billion USD. Even before the pandemic, financial data providers have been on the offensive through M&A, starting with LSEG’s 27 billion USD move to take over Refinitiv last year (August 2019).

Separately, both IHS Markit and S&P Global are major players in financial analytics, through collecting, refining and piping data that “power chunks of modern finance”. Formed out of a merger between IHS and Markit in 2016, IHS Markit is a global diversified provider of critical information, analytics, and solutions for major industries and markets. IHS Markit has more than 50,000 business and government customers, including 80% of the Fortune Global 500 and the world’s leading financial institutions. S&P Global, on the other hand, is the world’s leading provider of credit ratings, benchmarks and analytics in the global capital and commodity markets. It is the provider of the popular S&P 500 Index, as well as several other global market indices.

Combined, they have the potential to compete with the likes of Refinitiv and Bloomberg, whose expensive terminals are ubiquitous on Wall Street. The deal will group S&P Global’s presence in the stock market index business and credit ratings with IHS Markit’s strong position in debt market and derivatives analytics. Bloomberg Intelligence’s head of market structure research, Larry Tabb also stated that ‘defence is the new offence,’ and that ‘Given the fee pressure the industry is under, it will be the bigger players that survive and thrive.’

Even though the S&P Global-IHS Markit deal marks the biggest deal of the year, the market will still be dominated by Bloomberg and Refinitiv. As depicted below, the combined IHS Markit and S&P Global will only control about 8% of the market. However, Robert Iati from Burton-Taylor International Consulting (a global leader in financial market data industry analysis) reasoned that, rather than taking on the data giants directly, the merger is more about building specific niches. “The last two decades has been about chasing the two behemoths, but to beat them you need to do it by going after the data of the future”. 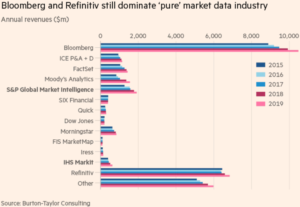 Figure 1. S&P Global and IHS Markit annual revenues in comparison to other companies in the industry. Financial Times.

Regarding the rationale, the transaction joins two leading organisations with unique, highly complementary assets to enhance customer value proposition. The combined company will benefit from increased scale and mix across core markets with attractive growth adjacencies. S&P Global chief executive Douglas Peterson highlights that ‘Scale matters because you can get more volume through the same operational set. More customers, more products, more innovation’. Both companies underlined that the merger will generate annual free cash flow exceeding 5 billion USD by 2023, which, in addition to the achievable savings, would allow the group to deploy more than 1 billion USD annually into technological improvements. Furthermore, the group will also benefit from balanced earnings across major industry segments and a resilient portfolio, providing additional financial flexibility to pursue value‐creating opportunities. For S&P global specifically, this is significant as it will reduce the dominance of its namesake ratings business, which accounted for more than 50% of its overall operating profit last year.

Peripheral to the core prospects that the combination presents, one interesting component of the deal is the ‘opportunity to create new products from very valuable datasets in both S&P Global’s bond issuance and IHS Markit’s fixed income pricing and valuation.’ This could result in additional revenue synergies ‘outside of the obvious cross-selling opportunity,’ Jefferies analysts revealed.

The deal also presents highly attractive financial benefits, with a targeted total run-rate EBITA impact of approximately 680 million USD, to be achieved by year 5. Breaking this down, the combined company expects to deliver annual run-rate cost synergies of 480 million USD, with approximately 390 million USD expected by year 2 end (post-closing). An additional 350 million USD in run-rate revenue synergies is expected from cross-selling and new products. Finally, the transaction is expected to be accretive to earnings by the end of year 2, post-closing.

However, completing mega-deals is easier said than done. The tie-up between S&P Global and IHS Markit will likely warrant lengthy probes from antitrust authorities due to the overlap between their data offerings. It could also force possible divestitures, as evidenced by LSEG’s sale of Borsa Italiana. Regulators have expressed concerns over the control of data that large organisations hold as it can lead to industry gatekeeping, and the current rapid creation of data ‘supergroups’ and subsequent market shrinkage (as a result of the frenzied consolidation race among financial information services) should raise alert levels. The difficulty that the smaller 27 billion USD LSE-Refinitiv deal attracted is a strong indication of what is to come.

Reuters reported that ‘S&P Global may have to divest part of IHS Markit’s ‘resources’ division that focuses on market pricing to secure regulatory approvals for the deal.’ This is because it includes an overlap between IHS Markit’s oil price information service Opis and S&P Global’s commodities and energy information service Platts. However, it was added that it is a small overlap and a sale of parts of Opis would not impact the companies’ profitability.

Overall, while there is likely a tough road ahead in attaining antitrust clearance, the deal marries two of the most famous names in financial markets, which has a long-term potential of creating a noticeable contender to Refinitiv and Bloomberg. Finally, the combination allows the companies to keep pace with the industry’s race for scale and surging demand for data, while simultaneously providing attractive financial benefits through the anticipated realisation of both cost and revenue synergies.