The decoupling of the US stock market and the economy – a Tinder date gone wrong?

September 6, 2020 / Comments Off on The decoupling of the US stock market and the economy – a Tinder date gone wrong? / News

The stock market should generally reflect the overall state of the economy. However, this assumption has not remained true during COVID-19 as the S&P 500 has reached all-time highs in the context of a global pandemic and struggling global economy. Typically, if an economy is in an upcycle, then firms enjoy greater profits resulting in higher dividends, meaning shares become more attractive to investors. Thus, a growing economy results in higher share prices. This relationship between stock prices and the economy is also observable during a recession.

Another explanation for this relationship is provided through the perspective of the consumer. Bull markets create a wealth effect. Consumers see the stock market rising, meaning they feel more confident about their investments and therefore spend on durable goods such as cars or houses. This increases consumer spending and economic growth. This theory is supported by the Figure 1, showing the performance of the S&P 500 index over the last 10 years. The graph shows that when the financial crisis hit in 2008, the stock market plummeted as expected, making it surprising that a similar dip is not observable in 2020. 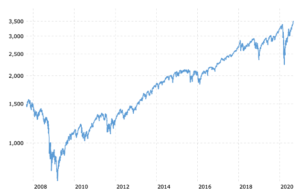 Figure 1. Graph showing the performance of the S&P 500 index over the last 10 years. MacroTrends.

Analysts have argued that the lack of a prolonged bear market in 2020 is due to a decoupling of the stock market and the general economy. Decoupling occurs when the returns of one asset class diverge from their expected or normal pattern of correlation. In this case, a diversion occurs between the country’s stock market and its underlying economy.

The US market has, this year, defied the laws of financial physics, which has led to the catchphrase “Wall Street not Main street”. This gives rise to the central question of this article, namely how the S&P has continued to rise, and what factors are keeping share prices high, during a global pandemic. This could perhaps be due to stock markets being driven not by fundamentals nor by the news itself, but rather by investors’ expectation of how other investors are going to react to the news. Indeed, Robert Shiller, a Yale economist who correctly predicted the 2008 financial crisis, argues that these interdependencies between investors led to 3 separate phases, which are illustrated in Figure 2.

Figure 2 showing the S&P 500 during COVID-19 and the three phases of market reaction. FactSet

The first phase occurred when the World Health Organization (WHO) declared COVID-19 a ‘public health emergency’. This news resulted in a 3% rise in the S&P 500 as interest rates remained unchanged, causing the index to hit all-time highs. One potential reason for this rise is that because COVID-19 was such an unprecedented event and had not yet spread widely in Europe and the US, most investors did not react strongly to this news. In addition, from a historical perspective, the last pandemic was influenza in 1918-20, so little statistical analysis was available on the impact of pandemics on the stock market.

The second phase developed when the S&P crashed 34% in February, as the severity and spread of COVID-19 was fully realized. Therefore, investors moved away from equities opting for safer assets, or safe havens, such as gold, resulting in a significant drop in the S&P 500. However, within only a month the third phase began with the S&P starting its 40% rise, most likely due to the large fiscal stimulus provided by the US government and the Federal Reserve cutting interest rates to near-zero. This enforced investors’ belief that the S&P 500 was a safe space to invest once more and the fear of failing to capitalize on low equity prices meant investors returned equity investments.

All three stages illustrate that although the stock market is expected to follow the general economy, price movements are rarely logical and often revolve more around investors’ interpretation of the news and how these events could affect the future, rather than the news itself. Howard Silverblatt, a senior analyst at S&P Dow Jones Indices, encapsulates this sentiment, stating: ‘The market is saying, ‘We know where we are today, but where are we going tomorrow? In this case, tomorrow is 2021.’