The GameStop Incident and the Need for Further Regulation

March 8, 2021 / Comments Off on The GameStop Incident and the Need for Further Regulation / News, Policy Analysis

The COVID-19 pandemic has negatively impacted several retailers, especially those which have been unable to shift to online sales. GameStop, a video games retail chain, is no exception – the company had even recently announced the shutdown of 450 stores. Its price per share value had been consistently declining since 2016 and was worth approximately 20 USD on 11 January this year. However, a day later, a group of Reddit users encouraged each other to buy GameStop stocks and raise its value. Within two weeks the price rose to 347 USD, noting an increase of over 1700%.

While those with greater stakes benefitted massively, this produced an estimated 6 billion USD in losses for hedge funds ‘short selling’ those shares (placing a bet on stock prices going down by borrowing shares, selling them at the market rate and buying them back later at the reduced market price to return to the lender). Based on the previous conditions of GameStop, hedge funds such as Melvin Capital and Maplelane Capital placed their bets on the company shutting down. Instead, they witnessed the opposite, and some immediately hedged their positions or bought the stocks to cover their losses. This ‘short squeeze’ led to a sharp rise in both share demand and share prices. Melvin Capital faced a 53% loss in January and its assets under management fell from 12.5 billion USD in early 2021 to approximately 8 billion USD, which includes emergency funding of 2.8 billion USD from Point72 and Citadel, two US-based hedge funds. 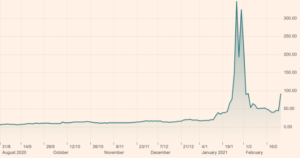 Figure 1. Graph showing the price per share value of a GameStop stock from August 2020 till February 2021. Financial Times.

In such a situation involving the exchange of volatile stocks, the question arises as to whether there is a need for online trading platforms, such as Robinhood and Interactive Brokers, to protect investors. The UK’s Financial Conduct Authority (FCA) stated recently in response to the GameStop movements that ‘UK Investors should take care when trading shares in highly volatile market conditions and that they fully understand the risks they are taking. This applies to UK investors trading both US and UK stocks’. Soon after the stock experienced a surge in value, several platforms restricted people from buying and only allowed them to sell their stocks. Robinhood in particular has sparked an outcry among its users for the move, especially since the service claims to ‘democratize finance for all’ and that everyone should have access to the financial markets. In fact, Brendon Nelson, a customer of the app, has even filed a lawsuit in federal court in Manhattan, accusing the service of ‘breaching its contract by failing to disclose that it was going to randomly pull a profitable stock from its platform,’ of ‘negligence,’ and of ‘breaching its fiduciary duties and its implied covenant of good faith and fair dealing.’

In response to this incident, the US Securities and Exchange Commission (SEC) claimed to be ‘working with their fellow regulators to assess the situation’ and there are rumours about an upcoming market manipulation case. The debate is intensifying over how regulators should respond to this conflict, which raises the prospect of new rules that could be biased against retail investors. This could critically reduce the trust in regulators since their effective message would favour Wall Street over smaller players when it comes to using short squeezes. Regardless, the incident has made regulators realise the need to establish clear policies for all investors, hedge funds and financial service companies to follow when dealing with the financial markets.

GameStop provides a timely reminder for investors, market makers and investment platforms to prepare for the unexpected. Social media bandwagons causing disproportionate market movements is an unprecedented process. Laws concerning consumer protection and market manipulation must therefore be clarified so that the regulatory bodies can perform their functions with more certainty, and so retail and institutional investors can adapt.