September 9, 2020 / Comments Off on The UK property boom: long-term or destined for collapse? / News

The calendar year of 2020 has seen the UK, along with many other nations, experience the deepest recession in its history as a result of the COVID-19 pandemic. However, despite this, August saw UK house prices reach record highs with properties being taken off the market at rates not experienced since the financial crash in 2008. In nominal terms, UK house prices have risen by 2%, according to Nationwide, reaching an average price of 224,123 GBP, which is 3.7% higher than August 2019 (Figure 1). Such a large monthly jump has not been recorded since February 2004. 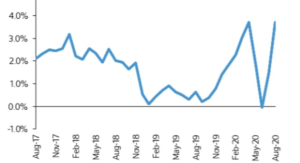 A key factor in the increased demand for UK properties is the reduced rates of Stamp Duty Land Tax (SDLT). The stamp duty holiday introduced by the Chancellor, Rishi Sunak, means that buyers of homes valued up to 500,000 GBP no longer pay any stamp duty on the purchase, with properties above the threshold only being taxed on the value above that amount. The policy was introduced by Mr Sunak to increase demand after the property market was hit significantly by lockdown, during which house prices fell for four consecutive months from March to June. Additionally, due to the Bank of England cutting the base interest rate to 0.1% in March, mortgages have become cheaper for property buyers in the UK, increasing demand for UK homes.

Aside from this, Nationwide chief economist, Robert Gardner, suggested that another reason for the housing boom may be that ‘people are beginning to re-assess their housing needs and preferences as a result of life in lockdown’. In fact, 15% of people surveyed in May by Nationwide were considering moving property as a result of lockdown, creating pent-up demand. When examined geographically, the greatest increase in demand is being experienced outside of London. In particular, prices are rising at a rapid rate in coastal and rural areas that boast more green space, a feature in high demand after urban populations experienced months of lockdown in smaller properties this year. In addition, the success many firms have experienced with employees working from home may encourage a shift toward a different working lifestyle, with many workers even preferring working from home. This would reduce commutes for many workers while simultaneously driving up the price for non-London properties.

However, as the recession continues, it is likely that the labour market will experience further turbulence as government support and furlough schemes come to an end. Consequently, unemployment is expected to rise to 7.4% this year, according to the Financial Times. It is likely that this will reduce the activity in the housing market, causing the current rally to come to an end over the next new quarters. Additionally, the change of the previously mentioned stamp duty regime next spring will inevitably, with all buyers having to pay the fee once again, have a negative impact on the current high demand of UK properties. This extra financial requirement will likely make property buying less desirable than in previous quarters – in fact, households planning to move in coming years may even fast track their moves to take advantage of the stamp duty holiday, further adding to the ongoing property demand boom. The COVID-19 pandemic has also meant that banks are becoming much more risk-averse than before, meaning many will find it harder to obtain a mortgage in months to come. Those affected most severely by this will be first time buyers with small deposits.

A combination of the above factors means that the recent excess demand for UK property will likely be short-lived and that UK house prices will begin to decline towards the end of the year and into 2021. The timescale of this price decline will largely depend on when furlough schemes and stamp duty holidays end. An extension of these government schemes might have the potential to extend the recent successes of the UK housing market. However, in absence of these policies, a collapse in house prices appears inevitable.