January 24, 2021 / Comments Off on Why Ultra-Rare Rhodium Ended-Up as the Top Performing Commodity of 2020 / featured, Metals & Mining, Natural Resources, News

As of the beginning of this year, the price of the rare transition metal rhodium has risen from 6000 USD to 20,000 USD per troy ounce (circa 31g, slightly heavier than the traditional empirical ounce). This gain of over 300% surpasses every individual company on the S&P 500 index and well outstrips other top performing commodities such as gold and silver. It is worth considering why this notoriously volatile metal has spiked in price this January.

Firstly, the market for precious metals has generally been bullish over the past year. The price of precious metals soared during 2020, both in response to stricter emission-related regulations in developed economies and inflationary fears as central banks printed substantial amounts of fiat currency (paper) to mitigate the economic impact of the COVID-19 lockdowns. Ever since U.S. President Richard Nixon decoupled the U.S dollar from gold in 1971, currencies are backed by no value besides their usage as a means of exchange. Therefore, in the current environment where central bankers are printing currency at record rates, more investors are choosing to store their wealth in alternative assets, such as property, equities and commodities, all of which have an intrinsic value that strengthens against inflation. The reason for the price appreciation of precious metals compared to other commodities and the stock market over the last year is two-fold. In addition to their usage as a hedge against inflation, there has also been a major uplift in demand for their uses in the real economy. For instance, metals such as copper and nickel will have a key role in upcoming global decarbonisation due to their reliability as conductors in electrical engines.

Rhodium’s primary usage is in catalytic converters, devices inserted into fuel exhausts to remove environmentally harmful gases from engine fumes. Approximately 80% of the 1 million tonnes of annual global rhodium demand is accounted for by catalytic converters, which renders the price of rhodium highly sensitive to the demands of the automobile industry. Despite global car sales decreasing by 20% across 2020, stricter emissions tests in the EU and China have increased demand for the metal from vehicle manufacturers and consequently, the price has risen rapidly. However, the biggest impact on the rhodium price came from a major shock on the supply side. 85% of rhodium is supplied by South African mines, which have been significantly disrupted by the COVID-19 pandemic. In their latest precious metals report, Heraeus, the world’s largest refiner of platinum group metals, predicted that rhodium sourced from South Africa would be down 24% by the end of 2020. Rhodium consumers have responded by increasing consumption, building stockpiles to protect against the risk of shortages. This perfect storm of disrupted supply chains and a further boost in demand has been instrumental in the dramatic rise of the market price in 2020.

Up until now, rhodium’s price history has been characterised by precipitous rises and falls, in contrast to the general commodities market, where research has shown follows more rounded ‘super cycles’, as shown by Figure 1. 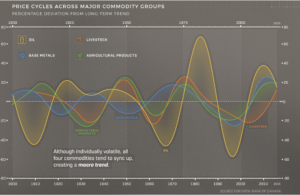 Figure 1. Percentage deviations of commodities from a long-term trend. Bank of Canada.

These cycles are theorised to occur because commodities markets react slowly to pricing signals. This results in the steady oscillations seen in Figure 1 where, once prices hit their peak, over-production occurs from suppliers having inflated demand expectations, subsequently dropping prices back below their mean level. 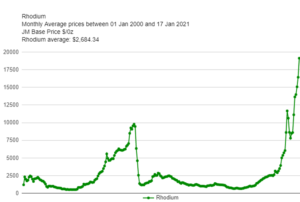 The final factors explaining rhodium’s deviation from these super-cycles shown in Figure 2 are from the supply-side. Rhodium is mined as a by-product of platinum and nickel mining i.e. it is not mined directly. Supply, therefore, has a very limited response to the market’s need for rhodium, since the operations of the mine are dictated by the economic status of the predominant metal. Furthermore, procurement departments at automobile producers have been known to substitute rhodium for platinum and palladium, responding to big price movements. In 2011, Deutsche Bank reported that the amount of rhodium in the average vehicle had halved to around 0.292 g from 2008 following the spike at the time and South African miners going on strike.  As can be seen, demand quickly plummeted as the temporary switch to alternatives proved successful and amidst a global reduction in automobile sales.

Overall, rhodium’s history suggests that the current high price is likely untenable. There are two factors supporting a higher rhodium price in the short term. The first is in future sales from car manufacturers. Rhodium is up to 7 times better than platinum and palladium as a catalyst for removing harmful gases from emissions and so will be instrumental in helping cars pass stricter emissions tests starting in the EU in 2022. The second is the current risk of South African mines being disrupted once again by the outbreak of a new COVID-19 variant, prompting panic buying to support inventories. Given those factors, it seems unlikely that the rhodium price will collapse in the immediate future. However, the current price is so abnormally high that if is not reduced by supply-side factors, car companies will be incentivised to use new technologies currently in development. In the much longer run, the demand for rhodium rests on whether catalytic converters are rendered obsolete. The UK has already pledged to ban the sale of new petrol and diesel cars by 2030 and similar policies are being set in place worldwide, meaning that only hydrogen or electric vehicles will remain in production. Of these only hydrogen vehicles produce toxic emissions and require a catalytic converter, so global rhodium demand from the automobile sector will be significantly reduced by the end of this decade. For now, in the coming months the bull-run may well continue as the pandemic continues to threaten mining output and automobile manufacturers strive to make their cars less polluting.